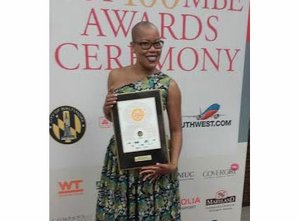 Dunbar can be spotted applying makeup to famous faces, or providing nail care services to political leaders like Rep. Eleanor Holmes Norton and Rep. Maxine Waters. She also works with actresses like Tamera Mowry-Housely and popular singers including Anthony Hamilton and Clay Aiken.

The celebrity manicurist established her own cosmetics brand, Bluffa Jo Cosmetics. She also works in her own establishment called Maisie Dunbar Spa Lounge in Silver Spring, Maryland. Her vision for the business was to create an oasis that provides a total spa experience for her customers.

Dunbar’s back-story begins when she was just five or six years old. Her aunt, the late Sophie Dunbar, told Maisie’s parents that their daughter would make it to Hollywood. Maisie was always fascinated by color and fashion.

“Growing up as a child in West Africa, and even when we came to the States when I was thirteen, I was always a trendsetter. Even in high school and junior high, I never did what everybody else did. I cannot tell you that I knew that being an artist is what I wanted to do, but I know that deep down inside, that is what I was destined to do,” Dunbar said.

Her parents nurtured the importance of education and attending college. She earned a bachelor’s degree in Computer Information Systems.

However, an unplanned event in 1993 led Maisie to reconnect with her creativity. “When I got laid off, I started honing my skill set and taking nail classes. I soon realized my skill set was not up to par. I started to meet fellow journeymen who were very excited about their jobs. A lot of them had been in the industry for way over 15 or 20 years. I wanted the excitement that they had,” Dunbar said.

After praying about her new career path, Dunbar dove into her endeavor as a full time manicurist. Today, she routinely works with five employees. She also works with freelancers in different cities, when providing services away from home.

In the early years of building her business, she rented booths in hair salons where she provided services. She was able to build her business based on referrals. Dunbar launched her first business as a nail studio. Six years later, she opened a nails and wellness center. In 2004, she earned her license in makeup artistry. She opened Maisie Dunbar Spa Lounge in 2008. Dunbar’s entrepreneurial legacy is built on determination, hard work, love for her son and belief in God.

“Failure was not an option. I knew that I had a little boy that I had to feed and give him shelter,” Dunbar said, “I can’t tell you that it was easy. There were times when I was working in four salons just to make sure my child had something to eat. Being where I am today is definitely a blessing.”

Despite Dunbar’s numerous career accomplishments, she is most proud of raising her 26-year-old son, Mhabhushah Koffa, as a single mother. He is now a college graduate.