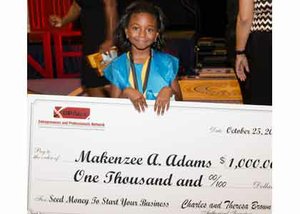 An idea to hold a gospel concert fundraiser benefiting students in need began with a reward that a local grandmother gave to her granddaughter. Phyllis Tee Adams once took Makenzee Annette Adams (“The Little Boss”) to see Grammy-nominated gospel-recording artists The Walls Group. Phyllis told Makenzee that she could achieve her goal to accomplish anything that she believed, if she put her mind to it, after The Little Boss said that she would host a concert featuring The Walls Group someday. Now, the seven-year-old Annapolitan is sponsoring her first Back to School Gospel Explosion concert on August 22, 2015 at First Mt. Olive Freewill Baptist Church in Linthicum, Maryland.

The gospel production will feature The Walls Group— a four-person Stellar Award winning gospel group comprised of brothers and sisters from Texas. Along with “The Little Boss,” well-wishers want to fill the 2,000 person sanctuary at First Mt. Olive Freewill Baptist Church. Makenzee, who will be dancing at the fundraiser, also wants others to have a relationship with God. Combining charity and spirituality sparked her idea to combine helping others with hearing good music.

When Makenzee was five or six years old, she recalls being impressed after hearing The Walls Group perform.

“So after they came out, I said, ‘Wow. One day I want to have a gospel concert with The Walls Group in it.’ And then I grew older, and I said it again,” Makenzee said.

She noticed at the beginning of the school year that some of her classmates did not have basic necessities. The fundraiser will reportedly help to provide assistance for students who attend Walter S. Mills-Parole Elementary, Wiley H. Bates Middle School and Annapolis Middle School. The Little Boss wants to provide needy students with uniforms, shoes, lunch money credits, health screenings, haircuts and personal hygiene products. Additionally, a portion of the proceeds will be donated to help Annapolis High School’s Performing & Visual Arts program. A donation will also be given to North Bend Elementary/Middle School’s Music Department, to purchase instruments for students in Baltimore.

Makenzee plays the piano, recently acted in a production and likes to cook. However, giving back is already an extremely important part of who she is.

“She [Makenzee] wants to make a difference in the lives of the young people,” her grandmother Phyllis said. “That’s the kind of heart she has.”

Makenzee has been working on her large philanthropic project with her grandparents— Phyllis Tee Adams and Preston Adams Sr.; her parents, DeWayne Hunt and Shauna Hunt; and at least five of Phyllis’ friends in Baltimore and Anne Arundel County. “The Village” is friends who volunteered to provide help with the concert and spread the word. Event vendors and sponsors are also being recruited to assist with production costs. Doing something good makes the work worth it to The Little Boss.

“I feel that it is very nice to help other people,” Makenzee said confidently.

The Little Boss received her nickname after Phyllis became the daycare provider for her infant granddaughter. Phyllis says that they did not want just anyone raising Makenzee, so she pitched in to help after retiring. By the age of four, The Little Boss began answering the telephone at her grandparent’s business, “Light It Up With Triple A,” in a professional manner. Makenzee’s hands-on training that she received while helping at the lighting company is paying off.

In 2014, Charles L. Brown Jr., vice president of a Prince George’s County business organization Entrepreneurs & Professionals Network (EPNet) called Phyllis’ residence and The Little Boss answered the telephone so professionally, Brown inquired about her age. After discovering that she just was six years old, Brown found out more about The Little Boss through Facebook, where her happenings were often posted by her grandmother. Charles told his wife, Theresa Royal Brown— who is also the president and founder of EPNet— about The Little Boss. The couple reportedly decided to grant the Legacy Rising Star/Young Entrepreneur Award to their youngest and first recipient who had not yet established a business. At the Legacy Awards Ball at National Harbor, Makenzee was given $1,000 for seed money to encourage her to open up a future business.

In addition to supporting a variety of causes, Makenzee began outreach each work at four years old by feeding the homeless at The Light House in Annapolis.

Through Little Boss Productions, Makenzee plans to host additional events. She offered a closing message to share with children who aspire to make contributions in their own community.

For more information about the event or to purchase Back to School Gospel Explosion tickets, visit: https://madmimi.com/p/ae0346.