Black Girls Vote seeks to get women to polls 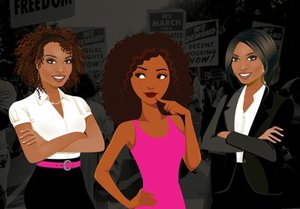 BALTIMORE — According to Nykidra Robinson, black women are the matriarchs of the African American family and when they lead, undoubtedly black men and their children will follow.

Robinson, a Baltimore resident whom friends describe as a visionary and motivator with a heart for people and a passion to change the world, is pushing black women to use their vast influence at the polls. 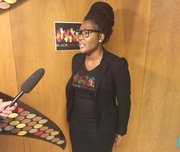 “We can’t sit back and make excuses,” Robinson said. “Our vote is our voice and it doesn’t matter if you don’t have a GED, of if you have a PhD, we’re all the same.”

Robinson started “Black Girls Vote,” a grassroots and nonpartisan organization created to represent the national and international concerns of women of color. She says they are dedicated to using their collective voice to transform areas where bias has the most profound impact on the lives of black women.

“It’s important for us to vote and it’s more important to do so as a unit because that’s where we wield the most power,” Robinson said. “Black Girls Vote is a factual statement. We have a higher voting rate than any demographic, so this is a call to action.”

During the last Baltimore City Mayoral Election in 2011, nearly 60 percent of eligible voters were women but only half of them voted, according to local statistics.

More than 400,000 black women and 2.2 million women of color have joined the eligible voting population since 2012, according to the Center for American Progress.

.“Our vote is our voice and we don’t want to lose that voice. Policy impacts our lives everyday so things that we are not content with can only change when we participate in the voting process regardless of our beliefs or religion,” Robinson said.

Black Girls Vote has placed specific importance on 18 to 25 year olds, and the organization is also encouraging registered voters to vote in the primary and general election while also promoting the early voting options resident of Baltimore have, according to Robinson.

“Our mission is to inspire a community of women to use the democratic process to address issues that impact women of color,” Robinson said.

To help further its mission, Black Girls Vote will host a “Mayoral Job Interview and Expo” from 5 p.m. to 9 p.m. Monday, March 21, 2016 at Western High School located at 4600 Falls Road in Baltimore.

Robinson selected TV & Radio Personality Jeff Johnson to host the event in which she’s invited each of the candidates for mayor to attend and be interviewed by voters.

She called the city a big business with a $3.2 billion budget, requiring that the next mayor— the city’s CEO— be interviewed.

“With the power of our vote, we can tell any candidate that we can get you there and we can keep you there,” said Robinson, a Frostburg State University graduate who has worked in both local and state government and has served as a neighborhood liaison in the mayor’s office, an outreach coordinator in the Lt. Governor’s office and as special

assistant to the director of the Department of Housing and Community Development.

“Black women are voting. We are tired and we are more aware so this is a united front,” Robinson said. “It’s important that candidates have ideas because we are not going to stand on the sideline and complain, we are going to the polls and vote.”