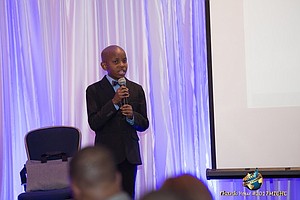 BALTIMORE — Over 300 people from diverse cultures, races & ethnicities gathered on November 18th, at the 2017 Men Impact Change Honor Ceremony, held at the Radisson Hotel in North Baltimore Timonium MD to break the cycles of Fatherlessness, of Violence and of Financial Illiteracy in Baltimore.

Men Impact Change (M.I.C) is a nonprofit organization founded in the year 2014 to honor men of Impact, and engage them in mentoring the boys and young men affected by gun violence and those without father figures. 40 Men were honored in 2015-2016. This year 16 Men advancing the legacy of change were honored in 5 categories: Leadership, Entrepreneurship, Philanthropy , Community Organizers as well as in Education. Baltimore County executive, Kevin Kamenetez, honored 2017 M.I.C honorees with the Baltimore County Executive citations.

Pastor Peter Mugweh of Life Source International was the Lifetime honoree. Some of the honorees include: Will Holmes, Founder of Baltimore Professionals and Entrepreneurs, Byron Deese of Dream Makers Network, Erastus Mong’are of StartUp Africa, Kavuma Dauda, Ugandan Manager of the Triplets Ghetto Kids of “Unforgettable” video with French Montana , Havard graduate sponsored by a holocaust survivor, Chris Mburu ( whose life documentary “A Small Act” was nominated for the Emmys award, & featured on CNN, you can watch the trailer at https://www.youtube.com/watch?v=pZjpnzKuVQ8 ) ( List of Honorees can be found at www.menimpactchange.org)

The second M.I.C Think Tank Panel was a bare knuckle electrifying thrill ride! 4 dynamic panelist discussed ways to break the cycles of False Masculinity, of Fatherlessness & of Substance abuse. The panelists were: Christopher Mburu, a Havard graduate & Founder of the Hilde Back Foundation, named after a holocaust survivor who sponsored his education to Havard, Prof Sadiq Ali, Founder at Millionare Manners Academy, Christopher Preston, Founder at Preston’s Practical Perspectives and Robert Burale, Founder at The Naked Truth.

Men Impact Change was founded by a young woman, Sonnie Njau in the year 2014, with the goal of engaging great men in the community to help break the negative stereotypes affecting our boys and men, raising awareness to the importance of positive masculinity as well as mentor and transform the lives of young men in the community. The board members include: Michael Mugo-Director, Father Joe Muth os St Mathews Catholic Church, Patrick Ng’anga & Dr. Phil Farfel.

It was a groundbreaking ceremony that brought hundreds of men, Mothers of young men & supporters of the Men Impact Change movement together to help mentor boys into the next generation of men & leaders in our community. The ceremony was inspired by Frederick Douglass quote, “It is easier to build a boy that to repair a broken man.” To many, this ceremony made history