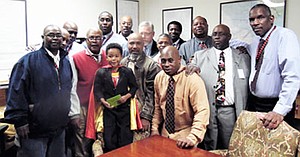 BALTIMORE — It takes some of us years to discover our life’s calling, but for 5-year-old Tyler Stallings the call to philanthropy and his current career as CEO of KidTime Enterprises came at the tender age of four.

While many children were unwrapping gifts and sneaking an extra piece of Christmas candy, Tyler spent the recent holiday season raising more than $1,000 for homeless veterans and sponsoring a Christmas giveaway at the Maryland Center for Veterans Education and Training (MCVET), where he also provided a computer for veterans to conduct employment searchers. 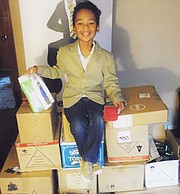 Five-year-old kidpreneur Tyler Stallings with all the donations he collected for MCVET, an nonprofit organization that helps homeless veterans in the Baltimore area.

Coverage of his philanthropic efforts was featured on Fox 5 – DC and CBS’s WJZ Television.

“I learned that kids can give back too,” the young entrepreneur said, reflecting on the success of the MC VET’s project. “This project helps me understand how important it is to help people like the homeless and elderly veterans.”

With the support of his mother, Andrea Blackstone, Tyler published his first book, “Tyler Goes Around the World,” the story of a young super hero who traveled the world doing good deeds.

The tale of a superhero doing good deeds evolved into reality when Blackstone encouraged Tyler to use his spunk and initiative to bring happiness into the lives of veterans in need. Both Tyler and Blackstone are children of veterans and familiar with the “long journey after service to our country is over.”

Tyler’s “do-good” work with veterans began with a Give Back to Veterans Day Project in March 2016 to ensure that homeless veterans had basic toiletries and supplies.

“When Tyler asked me one day why some veterans were homeless, I knew he had a natural curiosity and compassion about homeless veterans that could serve as the springboard for his first project,” said Blackstone.

“Tyler and his mother took a tour of the MCVET Center and Tyler decided on his own that he wanted to do a project to support homeless veterans,” said Jeffrey Kendrick, USAF (Ret), executive director of the MCVET Center. “You sometimes think the youth of today are not aware of the sacrifice of veterans. So, for someone who is five years old to show that kind of concern, that is near and dear to my heart.”

Like any good businessman, Tyler relies on a solid business partnership to handle the many organizational details needed to maintain the business and to support his emerging vision. Blackstone is starting a nonprofit on Tyler’s behalf that will allow him to accept charitable donations for his outreach projects.

The response to Tyler’s efforts from the community has finally caught on and the reaction to Tyler’s Superhero Holiday Project was encouraging, Blackstone said.

“Lots of people ignored Tyler when he first tried to talk to them about helping veterans. Some people promised to help and never showed up after meetings were scheduled,” Blackstone said. “I taught Tyler how to deal with that and more.”

Tyler is not resting on his laurels from 2016. The young entrepreneur is already working on his next project to support veterans this spring. He is also branching out with a new book to help other children learn Spanish and a $500 Summer of Service grant from Disney, Incorporated.

"I really want to help MCVET again because I like what they do there. I want a nonprofit for my Give Back to Veterans Day project, because it will help more veterans, and more locations that need my help," Tyler said.

As for his business partner, financier and mom, Blackstone is on board to support Tyler’s dreams for the duration.

“I am committed to embracing the journey in 2017, so that Tyler can move forward to monetize his ideas, and offer encouragement to veterans along the way,” Blackstone said with a smile.

Note: On Jan. 3, 2017, Tyler was notified that he is the tenth $1,000 Daisy Button Believes Grant winner. He will use the money to make a bigger impact with his veteran project. Tracey Serebin is the founder of the Florida-based organization that invests in youth's ideas through Daisy Button Believes. The grant money enables youth to create compassionate businesses, and help the world become a better place.