College student’s campaign raises over $11,000 to keep others cool 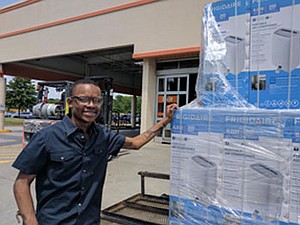 DaJuan Gay, a 20-year-old college student who attends the University of Maryland Eastern Shore (UMES), can vouch for the power of using social media to make a positive community impact.

During summer break, Gay felt concerned that battling high temperatures is problematic for his neighbors who reside in Eastport Terrace in Annapolis, because some do not have any air conditioning. Gay lives in the public housing complex community with his mother, Heaven White.

Gay posted a message about his neighbor’s plight in a Facebook forum where Annapolitans interact with each other online. His comments sparked a swift solution. Volunteers united to raise money to purchase free, standing air conditioning units for individuals in need through crowdfunding. The campaign is still gong strong.

“We started it ("A Cool Campaign") just last Thursday (July 20, 2017). I simply made a post in the Eastport (Neighborhood) Forum group on Facebook, and asked people to reach out to their elected officials. All I wanted was attention to be brought to these underserved communities,” Gay said. “They (residents of Eastport Terrace) don’t have air conditioning, they don’t have decent playground equipment and things like that. I see that so much more could be done in this community.”

During a walk to determine how many Eastport Terrace residents had air conditioning, A Cool Campaign volunteers were welcomed by these neighbors. The mother said that her children were able to sleep in their bedrooms for the first time, thanks to the air conditioner that was delivered because of the community fundraiser.

Barbara Webber responded to his post on the Eastport Neighborhood Forum. Webber, an Annapolis native who has been involved in community projects for over 25 years, told Gay not to listen to the naysayers who initially voiced negative opinions about his concern.

Webber met with Gay in person to help him take action. She suggested that setting up a crowdfunding campaign could raise money to purchase air conditioners. Their initial goal was to help 25 people. After another forum member encouraged others to come together for the cause, Gay says that things took off. Hearts softened, too.

“That night we [collected] $1,600,” Gay said, “And then, when I woke up the next morning, we had $4,700 in the account for this fundraiser. I could not believe it. Overnight that happened and we’ve just been continuing to raise money.”

As of July 25, over 45 freestanding air conditioning units have been delivered to people who needed them. Gay added that an individual who has multiple sclerosis and is a stroke survivor, received a free air conditioner. "A Cool Campaign" continues to impact Annapolitans with help from volunteers and donors who are answering the call to help. Kiddie pools, water, ice, fans and portable air conditioning units have also been donated to help others beat the sweltering heat.

“We started with Eastport Terrace and that’s where we’re immediately going, but what happened through the project that took off so well on social media is that people from other neighborhoods are calling and asking [for help]. We’re just going to keep pushing that money to help as many people as we can,” Gay said. “There are a lot of people in the city who don’t have central air and it really, really, really shocked me.”

Volunteers for “A Cool Campaign” led by Gay, walked through Eastport Terrace on July 24. They counted 22 homes with central air and 56 without. They plan to continue to raise funds to deliver at least 10 more air conditioning units this week. Since residents from other Annapolis communities are reaching out for help to obtain air conditioning, the group plans to buy as many air conditioners as donations will allow.

Webber even hopes other communities will replicate "A Cool Campaign's" model.

“Because DaJuan lives in the (Eastport Terrace) neighborhood, his focus has been who needs them [there]. His mom has lived there a long time so they have teams up to identify the most vulnerable people first. Our priority was elderly, disabled, people with little children and then everybody else after that,” Webber said. “If you put passionate youth and experience together in the community, you make miracles happen. DaJuan is a born leader. He doesn’t give up, and he cares deeply about his community. That’s a winning combination— that’s our future.”

The price of each air conditioner is $260. If you would like to donate to “A Cool Campaign,” visit https://fundly.com/urgent-a-c-for-maryland-needy-a-cool-campaign.