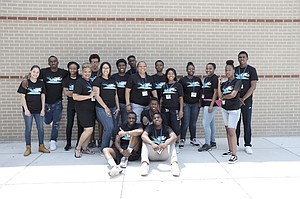 A group of youth left a lasting impression at a Baltimore school thanks to one summer camp. The youngsters, who were 14-17 years of age, participated in “Camp Impact,” a five-week camp that introduced them to functional life skills. The camp exposed the youth to educational and cultural experiences to prepare them to become future leaders in their community.

Camp Impact’s largest community outreach project was a reading-themed mural created by the campers at Fort Worthington Elementary/Middle School in East Baltimore’s Berea neighborhood. The mural’s theme is “Planting the seeds to read.”

On Friday July 27, 2018, Camp Impact closed out their summer camp program with a VIP reception and an unveiling of the mural. The ceremony took place at the school, which is located at 2710 E Hoffman Street in Baltimore. Fifteen youth participated in Camp Impact, which ran from July 25, 2018 to July 27, 2018.

Camp Impact was founded earlier this year by Live the Dream Foundation, a non-profit organization created by All Walks of Life LLC (AWL). The organization was founded in 2006 as an outpatient mental health clinic in the Baltimore metropolitan area. AWL assists youth who are in crisis and need support as they strive for self-empowerment. Live the Dream partnered with the Baltimore City Youth Works program to create the summer program.

Dr. Gwen Taliaferro is the director of Live the Dream Foundation and was the camp’s director.

“These were beautiful young people,” said Dr. Taliaferro. “We have to help children move along to assist them in achieving the goals they have set for themselves. We mentored them, and gave them life-skills. We have to have safe villages for our children. It is also important for our children to feel they are a part of the community and are giving back to it.”

During the camp, artist Breonna Erica worked with the youth.

“Breonna was outstanding,” said Dr. Taliaferro. “We didn’t know the painting skill of the campers, but Breonna said she would show them how to paint. Some of the students painted, others washed out the brushes, and others ran upstairs and downstairs to get and bring back supplies. They all pitched in to complete the mural, and they felt really good about that.”

She added, “At the end of the camp, they all received certificates. Breonna and the camp’s counselor Collette Preston talked to each of them about how they saw them grow, the light they saw in them, and what they needed to focus on. The children felt good about what they heard. Kids need to hear things like that. They were encouraging words for the youth, and made them feel good. They can take that encouragement with them back to school.”

During the camp, various speakers came in and spoke on a variety of topics, which included health and entrepreneurship. The speakers included Lee Taylor Butler, a developer and licensed realtor.

A camper works on the mural during the five-week camp.

“We painted the mural at Ft. Washington, but in the afternoon we honed in on life skills,” said Preston. “We had a variety of speakers to come in and speak to the campers on various topics. Ms. Butler told her story from beginning to end. She is very successful, and her story inspired them. It let the campers know they can do it too. The students were paid for the mural, which gave them the opportunity to earn money over the summer. When it was complete, the campers’ reaction was ‘Wow! We did this!’”

She added, “The camp was incredible. It was seamless. The kids came from various backgrounds and bonded. They encouraged one another, laughed together, ran together, and played together. The goal of the mural was to give back to the younger children, and encourage them to read more and imagine more. The camp taught them there are many ways to give back. Camp Impact lived up to its name. It definitely made a huge impact.”