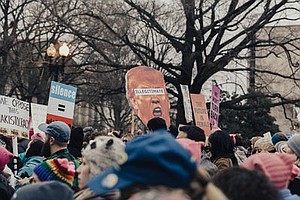 It is now more evident than ever that Mr. Donald Trump is not competent to serve as president of the United States of America.

To place the entire nation secondary to his personal biases, crass conduct, delusion and disrespect to nation states is both dangerous and antithetical to his oath of office. He clearly demonstrated a lack of faithfulness and an unwillingness or inability to protect the United States at the Helsinki Summit with Mr. Putin.

To act singularly and recklessly against experienced advisors; to ignore briefings in favor of his inexperienced opinion and outright delusion; to denigrate the Intelligence community; and to evade answering critical questions from the American press on the world stage, is not the behavior of a faithful, protective president.

Perhaps it is past time to call into question Mr. Trump’s general mental wellbeing.

Sen. Cardin, this is not a partisan issue to be played back and forth across the aisle or pushed down the road to another session. Congress must step up now and fulfill its role in reigning in and holding accountable a malfunctioning president with a personal agenda that supersedes the domestic and international affairs and concerns of the United States of America.

Please, please communicate this to your congressional colleagues regardless of the side of the aisle on which they may be seated.