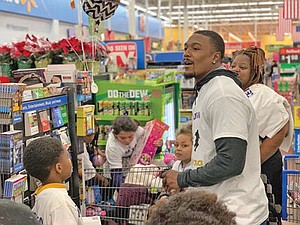 Baltimore Ravens safety Tony Jefferson joined teammates to take children from the Boys and Girls Club of Metropolitan Baltimore holiday shopping as part of his annual “Shop With A Jock” that gave local youth an experience they will cherish for a lifetime.

The 50 children who participated in the Shop With A Jock outing were given a $100 shopping spree on Monday, December 3, 2018 at the Walmart on Frankel Way in Cockeysville.

Jefferson, 26, was an undrafted free agent in 2013 after excelling at the University of Oklahoma for three seasons. He signed with the Ravens in March 2017, and is regarded as one of the premier safeties in the NFL. He underlined his attachment to the Baltimore community, despite only being here going on two years.

“I’ve really grown attached to this community— this city,” said Jefferson, a San Diego, Calif., native. “I really enjoy the family-like feeling I get around here, so I feel like it’s easy for me to give back and do these types of things in the community. It’s a great time being around all these people; everybody’s got a good spirit so it makes it easy for me.”

Jefferson’s Shop With A Jock, which is in its second year, is coordinated by EAG (Entertainers & Athletes Group) Sports Management, a public relations and management firm handling the public affairs of a number of professional athletes.

EAG Sports vice president Samantha Baggett says the company has worked with numerous NFL players for nearly 20 years to hold Shop With A Jock events at various locations through the U.S.

Jefferson is a client of EAG Sports, which handles much of his charity work and community events in addition to his holiday shopping event.

The participants of the gathering were between the ages of six and 17 from the inner city of Baltimore.

“Around this time, not a lot of kids, younger kids, has the opportunity to go in Walmart and spend a hundred bucks on whatever they want so I felt like this was a good opportunity for kids who were less fortunate… to come out here and enjoy themselves,” Jefferson said, adding how happy he felt to see the joy on the children’s faces.

Baggett suspects that Jefferson will host another event of like manner next year, confirming Shock With A Jock as an annual holiday function. She says her team and Jefferson have received regenerative feedback from participants and the community.

“It’s a fun experience for [the kids] to not only get fun gifts for the holidays, but they get to hang out with NFL athletes. That’s an experience most people don’t get,” Baggett said. “I think it’s a really cool event for them to have a night where they don’t have to worry about anything and they just get to be kids, and kind of shop, and be silly, and have fun.”

Additionally, Jefferson voiced the central message he wanted to get across to the youth.

“Just continue to work hard. Be good in school. Make everything not about presents but about giving, just so they can see the example of an NFL player who could be doing plenty of other stuff with his time,” he said.

After shopping with their favorite Ravens players, the children were served dinner courtesy of Jimmy’s Seafood.

Baggett commended Jefferson’s involvement in the Baltimore community, highlighting the significance that philanthropic efforts of professional athletes have on the less fortunate.

“I think when he takes time out to do something like this for kids in the community, I think it not only sets an example for young males, but for the league (NFL) in general. I think it’s nice for athletes [to] do something good with their time,” Baggett said. “There’s so many negative storylines out there so I think it’s really nice to see these young guys doing something to make a good impact on youth in the community.”

Baltimore Ravens safety Tony Jefferson took 50 children from the Boys and Girls Club of Metropolitan Baltimore holiday shopping, as part of the annual “Shop With A Jock” event at Walmart in Cockeysville on Monday, December 3, 2018. Throughout the event, Jefferson interacted with children for a holiday experience they will likely cherish for a lifetime. The children were served dinner after shopping, courtesy of Jimmy’s Seafood.