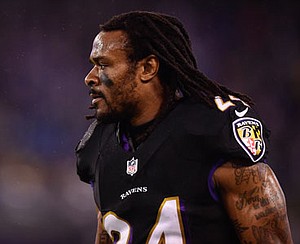 The Baltimore Ravens have been a pillar in the community since moving to the area in 1996. The team’s community outreach programs have done great things for local schools.

"We are going to do something very exciting," Carr told the students in a video on the Ravens' team site. "We're about to give away some tickets but listen, this is not a regular ticket. This is for February. I was able to finesse two tickets to the Super Bowl. I was trying to figure out somebody very important and special to give them to."

Carr is the Ravens 2018 Walter Payton Man of the Year nominee, as a result of his volunteer and charity work, which includes devoting his time to the students at Glenmount.

"Brandon Carr has been an intricate part of Glenmount," Mosley said via the team site. "He comes and reads to the children. He mentors the children, and he's able to bring resources, and brings smiles to their faces. The thing about him reaching out to our kids is that it's a long-lasting effect."

The kids recognize that Mosley is a big part of their exposure to a professional athlete like Carr. That's why it came so naturally for them to mention him as someone who deserves the Super Bowl tickets.

"Mr. Mosely, I just want to say thank you," Carr explained. "From day one, just opening the door and allowing us to come in and do our magic in your building with all of these special children. Hopefully, you can come watch us in February. That's the plan!"

At 7-6, the Ravens currently occupy the final wildcard spot in the playoffs. They have three games to go before the season is over and one would think that Mosley hopes he'll get to see his local team in Atlanta for Super Bowl LIII.