Fight To Save Monarch Academy Baltimore Heats Up 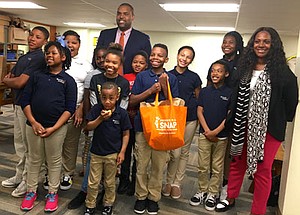 With 1,000 students who mostly hail from some of the most disadvantaged areas in Baltimore, Monarch Academy is renown as a beautiful, state-of-the-art and completely renovated building.

During the past year, earned a reputation as “terrific,” and with students increasing progress academically, emotionally and socially, there’s a growing outcry to keep it open.

“We’re urging Baltimore City Public Schools to withdraw their recommendation not to renew Monarch Academy Baltimore’s charter and, if it goes to vote, for the Board of School Commissioners to vote to keep the school open,” said the academy’s chief academic officer, Nakia Nicholson. “Parents, grandparents, students and community leaders are writing letters, making phone calls, holding rallies, making public comment at school board meetings, talking with the media and sharing how devastating closure would be to nearly 1,000 students and families and the community Monarch Academy Baltimore serves.”

Nicholson added that officials are also inviting the CEO and Commissioners who have not visited Monarch to tour the school and observe the classrooms personally.

Among the many reasons is how the students and faculty have benefited the community.

One recent project in October saw the academy and The Children’s Guild launch a community revitalization initiative to purchase and renovate vacant row houses as part of the school’s effort to support affordable housing and reinvest in the community.

“In addition to serving students through strong academics and after-school programs, Monarch Academy Baltimore is a pillar of the Coldstream-Homestead-Montebello community and Baltimore City,” Nicholson said.

“We provide fresh foods and vegetables to families and neighbors through Hungry Harvest, and we’re moving forward with a Community Revitalization Initiative in partnership with the Coldstream Homestead Montebello Community Corp. to purchase and renovate nearby vacant row houses as part of the school’s effort to support affordable housing and reinvest in the community.

“We’ve already renovated and sold our first home with more homes coming soon. Monarch Academy is a project-based learning (PBL) school, which means that we are a school of influence.

“All of the work we do involve creating authentic learning experiences for our students to positively address issues plaguing their communities.”

The website, SaveMonarch.org, has been developed to raise awareness about the campaign to save the academy. Other efforts also are underway.

“From our academic progress as evidenced by the latest school effectiveness review (SER) to our beautiful, well-equipped school building to our strong special needs program, Monarch Academy Baltimore is crucial to the success of our students and families, many who come from some of the most disadvantaged areas of Baltimore City.

“We give families a choice in education, and it’s imperative we can continue to do this.”

Earlier this month, a day of action was held where supporters wrote letters and made phone calls in support of the academy and officials are continuing to urge Baltimore City Public Schools to withdraw their recommendation to close the school, according to Nicholson.

“If it goes to vote on January 8, we’re asking the Board of School Commissioners to vote to keep the school open,” she said. “We’re optimistic Baltimore City Public Schools and the Board of School Commissioners will recognize everything we bring to our students, families and community and the tremendous loss and disruption this will be to the lives of our students and their families.”