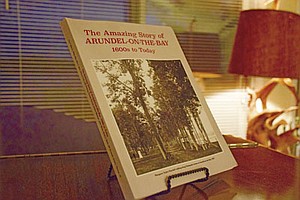 ANNAPOLIS — The book “The Amazing Story of Arundel-on-the-Bay:1600s to Today” is just off the presses and is available for the holidays at a discounted price ($35) at an author’s book signing party at the home of Aris T. Allen Jr. at 1323 Magnolia Avenue in Annapolis on Sunday, December 23, 2018 from 2 p.m. to 4 p.m.

Allen’s home is located on the site of a dispute between two white homeowners, which resulted in the community flipping to almost all African-American in the late 1950s. Allen will discuss the “white flight” in the community.

“The Amazing Story of Arundel-on-the-Bay:1600s to Today” is a brand new, fully illustrated and very detailed chronicle of generations of families who have both loved and endured a special and precarious piece of Chesapeake real estate. It chronicles a community evolving from the Gay Nineties, through the segregated Jim Crow era, World War II, woman’s liberation, and other 20th and 21st century realities. What emerges in the telling is a portrait of America’s social and cultural history that shaped a community.

It started in 1890, with the purchase of 350 acres south of Annapolis, Maryland on the Chesapeake Bay, America’s largest estuary. Lots on this waterfront land acquired by the Chesapeake & Colombia Investment Company were advertised for sale based on the beauty of the site and its solitude as a woodland paradise.

The community distinguished itself in unique ways:

•It began as almost all white to became almost all black in the 1950’s, and then evolved into the proudly integrated neighborhood of today.

•Hourly passenger train service from Annapolis connected travelers from Washington, D.C. and Baltimore to the Bay Ridge Resort, where the Company’s “Blackberry Train,” open summer cars, ran along the beach to Arundel-on-the-Bay from 1893 to the early 20th century.

•This smallest incorporated town in the U.S. for many years was all but wiped out by a major fire in 1916.

•The only community in Maryland where woman had the right to vote before 1920.

•Thomas Point Island, just offshore, had a home on it until it was destroyed by two hurricanes in the 1930s.

•During the War of 1812 a British Sloop of War ran aground off Thomas Point, an incident which almost caused Annapolis to be burned to the ground.

“The Amazing Story of Arundel-on-the-Bay:1600s to Today” demonstrates that all of our family histories are worth the telling. It’s available at local bookstores and on-line at Amazon for $39.95