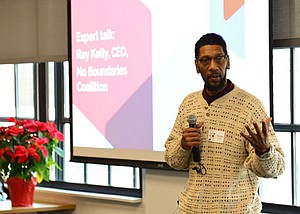 Facebook, one of the biggest technology companies on the planet, has joined community activists and Baltimore’s civic leaders in an effort to decrease violence in Charm City.

•Baltimore, which is more than 60 percent black, is the first city in the U.S. to work with Facebook to address violent crime.

•More than 70 percent of black adults use Facebook and 43 percent use Instagram, according to the Pew Research Center.

•Facebook officials said that partnership with Baltimore is a long-term project.

Executives from the global social network recently hosted a “design jam,” a guided brainstorming session, to begin the development of new strategies aimed at addressing some of the underlying issues that contribute to violence in Baltimore. Although Facebook has taken on similar initiatives abroad, Baltimore was the first city in the United States to enter this unique partnership with the tech giant.

Gail Kent, Facebook’s global public policy lead on security, said that there are a lot of technology-based solutions that can help bring communities together and improve public safety.

“As an organization with 2.2 billion users, we have a responsibility for safer communities,” Kent said. “There is no technology solution to violence…there will not be an ‘app’ that we develop to solve Baltimore’s problems, but we can bring a different way of thinking to the table to bring communities together and help reduce violence.”

Speaking briefly during the design jam, Baltimore’s Mayor Catherine Pugh said that community engagement and mediation are critical to reducing violence in the city. She also acknowledged the role that technology can play in improving the lives of Baltimore’s residents.

Pugh said that the city hired a data scientist, “to measure what we were doing every single day” and the Mayor’s Office of Sustainable Solutions has used that information to improve access to city resources and to boost agency productivity.

“It is these kinds of conversations and collaborations that make a difference in the future of our city,” said Pugh.

Facebook has a vested interest in solving complex socioeconomic issues that plague majority-Black cities like Baltimore, due to the high use of the social media platform among African Americans.

According to the Pew Research Center, 70 percent of black adults use Facebook and 43 percent use Instagram, which is owned by the tech giant; blacks outpace whites, when it comes to the use of both social platforms. Nielsen reported that 55 percent of black millennials spend “at least one hour a day on social networking sites, which is 6 percent higher than all millennials, while 29 percent say they spend at least three hours a day, nine percent higher than all millennials.”