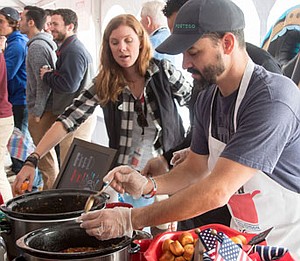 Some of the best chili cooks around will be vying for bragging rights during “The Baltimore Station’s 4th annual Stars, Stripes & Chow: Chili Edition” on Saturday, November 3, 2018 from 1 p.m. until 5 p.m. at South Point at West Covington Park in Port Covington. Proceeds raised from the event supports The Baltimore Station’s programming for homeless veterans.

The Baltimore Station is a therapeutic residential treatment program that helps homeless men— primarily veterans— bound by drug and alcohol addiction break the cycle and become self-sufficient members of society.

The event is being presented by the Baltimore Orioles, and will feature an opportunity for attendees to sample chili dishes prepared by local teams. Event highlights also feature food from Mission BBQ, Pizza di Joey food truck, activities and entertainment.

“We have six teams competing for the best chili,” said Kim Callari, Director of Development and Communication for The Baltimore Station. “A panel of celebrity judges will taste the chili.

Attendees will also have an opportunity to taste the chili. We also are judging contestants on who has the best, decorated booth. The contestants are encouraged to pull out all the stops. They really get dressed up for the occasion.

“It is a stiff completion because most compete year after year, and they are a pretty competitive bunch.”

“We are expecting about 450 people to come out on Saturday,” said Callari. “All of the funds raised will directly support the men in our program. The men can stay with us up to two years. During that time, they get job training, life skills, and other services that they need to graduate and live a life of recovery. The funds raised from this event support those services.”

Callari says the event raised $60,000 last year, but organizers hope to surpass that amount this year.

“Our goal is to raise $100,000 this year,” she said. “This is a fun event for families and individuals to attend. It is a great, inexpensive way to spend the afternoon and support a worthwhile cause.”

For tickets and information visit https://baltimorestation.org/event/stars-stripes-chow.