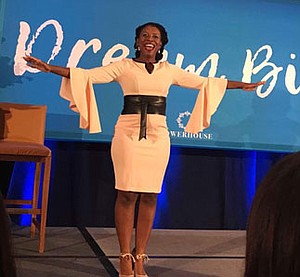 When Jackie Kotei was six-years-old, she was in a fire with her little sister. Jackie survived. Her sister did not.

The reason— her sister was hiding and the firefighters couldn’t find her in time to pull her to safety.

For Kotei, that gut-wrenching incident proved a defining moment in her life. She says she spent years working to heal and to move through “survivors guilt.”

“I often wondered, ‘Why was I the one who was saved? Why didn’t I do more to protect her? Why me and not her?”

Ultimately, Kotei says she came to realize the gift all of what happened and the true message her sister was telling her.

“She died because she hid. And my message is you don’t have to hide. You can stand out, be seen and get your message out into the world,” Kotei said.

Now a publicity, media strategist and marketing coach, Kotei, who is often booked to speak at corporate and other engagements, has a goal of helping to change the narrative in the media so that more transformational stories like hers are featured.

“We need more good news stories out there in the world. People who share their stories and how they overcame things in their lives,” Kotei said. “People who provide ways that society can do things better than we have before. I’m not under the illusion that we won’t ever have negative news in the world, but I’m committed to changing the narrative in the media so that more good stories get featured.”

Kotei added that it’s important to build a relationship with the media from a place of service, meaning how she can support them and help audiences follow. She says journalists often are seeking great stories, new creative approaches and good news and they need the help of others to achieve those goals.

“I believe that sometimes the biggest challenges we’ve had in our life, are the greatest gifts. I know now that it was no accident that at the age of six, I was in a fire, lost my younger sister and was on national TV as a result,” Kotei said. “It’s helped me to become who I am today and serve the world with what I believe is my divine calling. For many years though I didn’t get that. I felt guilty that I didn’t do more to protect her and that guilt carried over in so much that I did.”

With the help of mentors and coaches Kotei was able to look past the pain and the victim mentality she had developed and overcame survivor’s guilt. She continues to look toward to the future in a positive manner.

“Dreaming big in 2019 is about picking a goal that is beyond what you could ever imagine for yourself and focus on setting yourself up to win,” Kotei said.

“It doesn’t have to be done the way anyone else has done it before. You get to make the rules, you get to do it on your own terms— and it’s okay if people think you’re crazy.

“I know people look at my dream to change the negative news cycle and say it’s impossible but I know it’s only a matter of time and that today it starts with the baby steps— getting 100 positive stories featured this year and then in 10 years maybe a million, and then one day we’ll have newscasts where there are five good news stories instead of just two— and so on.

“So ‘dream big’ but start with the baby steps. Let your dreams fill up your heart, mind and spirit and be okay with how they take shape.”