This Too Shall Pass: ‘Birthright Citizenship’ Kerfuffle, Mostly A Get Out The Vote Tactic 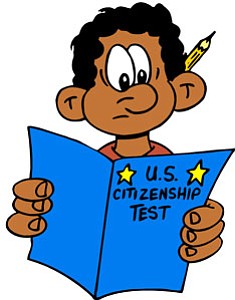 In a late October interview with news website Axios, U.S. President Donald Trump announced his intention to sign an executive order doing away with "birthright citizenship"— the notion that persons born on U.S. soil are citizens from birth with no need for any naturalization process.

It's not exactly an "October surprise." Trump used birthright citizenship as a rallying complaint on the campaign trail in 2016. He has done nothing about it in the nearly two years since.

Now he is weaponizing it again, along with fear-mongering about a migrant caravan wending its way through Mexico toward the U.S., in a last-minute effort drive an extra (and possibly decisive in places) fraction of a percent of Republican-leaning voters to the polls for the 2018 midterms.

After which he will almost certainly go back to doing nothing about it for another two years, until he trots it out a third time when seeking re-election in 2020.

Will he issue the threatened executive order? That seems unlikely, as does the passage of regular legislation ending birthright citizenship. The matter is too clearly settled, and has been for far too long, for a change to pass muster with the courts on any basis other than a constitutional amendment.

Birthright citizenship has been U.S. citizenship doctrine since the country's founding, in keeping with the English common law tradition of jus soli ("right of the soil"). It was codified in the Civil Rights Act of 1866, then enshrined in the 14th Amendment, then upheld by the Supreme Court in the 1898 case Kim Wong Ark v. United States.

Its likely resistance to easy change is a good thing for at least two reasons, even if you oppose "birthright citizenship."

First, letting the president discard parts of the Constitution at will, or Congress at a lower legislative threshold than the required 2/3 of both houses of Congress and 3/4 of the state legislatures, is inherently dangerous. If they can do it with the 14th Amendment, they can do it with the 1st Amendment (freedom of speech, religion, and assembly); the 2nd Amendment (gun rights); the 22nd Amendment (limiting the president to two terms)— where would it end?

Secondly, with respect to citizenship in particular, does anyone really want to give an ever, changing government discretion to tinker with the longstanding definition? Right now the threat is to "children of illegal immigrants." Release the genie and who's to say that three-years from now it won't become "people with fewer than three generations of American ancestors?" Or, for that matter "people who aren't registered to vote as [insert political party here]?"

Like many libertarians, I hold the whole concept of "citizenship" suspect. No less a light than Thomas Jefferson argued against the notion that a compact entered into in 1787 by one set of people could bind subsequent generations who haven't explicitly consented.

That said the Constitution is the set of rules on which the American political class stakes its claim of legitimacy to rule us. If they won't abide by it, why should we recognize their authority at all?