Ravens Look To Bounce Back After Bye Week 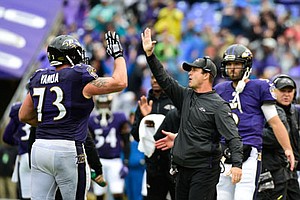 The Baltimore Ravens started the season with an impressive 47 - 10 win over the Buffalo Bills. Things were really looking good for them after shutting out the Tennessee Titans 21 - 0 in week 6. Entering week 7, the Ravens had a 4 - 2 record before things started to spiral out of control.

Coming from the bye week, Baltimore is stuck in a three-game losing streak and sporting a 4 - 5 record. They'll look to turn things around starting in Sunday's game against their AFC North Division rivals, the Cincinnati Bengals at M&T Bank Stadium.

"The bye came at a great time. It allowed us to refresh and regroup. We have seven weeks to make some noise, to play our style of football and win as many games as possible," said cornerback Brandon Carr. "Guys came back with a bounce in their step."

The Pittsburgh Steelers sit on top of the division thanks to a 6-2-1 record. Baltimore split their two games against the Steelers, winning one on the road and losing the other at home just before the bye.

The Cincinnati Bengals currently have the lowest playoff seed with a 5 - 4 record, which places them a game ahead of the Ravens. Cincinnati beat the Ravens earlier this year so winning this week is imperative for Baltimore if they plan on making a playoff push.

"We just have to win one game right now. That's where our mindset is right now. Everyone is laser focused on Cincinnati," said guard Marshall Yanda.

The second half of the season can prove to be a make or break period for head coach John Harbaugh who has been on the hot seat recently. Quarterback Joe Flacco may also be in the midst of a passing of the torch situation as well. Rookie quarterback and 2018 first-round pick Lamar Jackson is likely going to start in place of Flacco, while he recovers from a hip injury.

A win over the Bengals would even out Baltimore's record but there are still some tough games ahead. There are seven games left in the 2018 season and the Ravens plan to give their best effort in the remaining part of the year.

"We have a lot of fight left, there's a lot of football left. Everybody understands that we can fight our tails off and be relevant. Everybody is working hard and preparing. We feel we can get this thing turned around and get rolling," Yanda added.