Take Me Back To Astroworld: Travis Scott Show Review 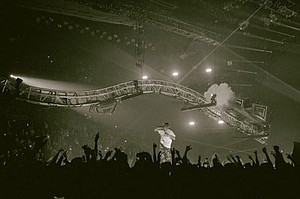 As a young kid, I was never very picky about things. Tuna sandwich for lunch? Cool. Heading to the park today? Great! We're going to Disney World? Awesome! I was pretty much a go with the flow kind of guy— easy to satisfy and hard to disappoint.

Nowadays, I wish I could say the same, but after a recent experience, I know that it isn't going to be easy.

I've been listening to Travis Scott for quite some time now. My opinions about him and his music have differed over the years, but his last two solo projects have impressed me. He has truly showed his artistic and creative abilities. His use of voice variations, vocal effects, and sudden production changes all lead to this one of a kind sound that people have grown to yearn for.

Because of these things, Travis has gained mega star status, and has consistently drawn large audiences to his live performances. Many people in my circle have attended his concerts over the years have all described them as crazy, fun and full of energy. However, that pretty much describes any situation where you would have tens of thousands of millennials in one place. Nonetheless, I decided to see for myself.

Travis Scott's Astroworld Tour kicked off right here in downtown Baltimore on November 8, 2018. One of my friends, Kendall, had four tickets to the show, and I was one of those of lucky four!

I didn't know how much of a ride we would be in for. As we walked into the arena there wasn’t an immense amount of energy in the air. People seemed “relaxed” and ready for a good show.

The most adrenaline-rushing thing I saw on the way to my seat was a guy who almost dropped his popcorn and caught it before it hit the ground— it was quite the catch.

After a slew of popular opening acts such as: “Sheck Wes,” “Trippie Redd,” and “Gunna,” everyone in the crowd was ready for the main event. As soon as the lights went back down, everyone in the arena stood up and this very colorful but almost dark video with a very psychedelic feel began to play, as the audience was introduced to Astroworld. In the video, were several references to both Travis and the theme park and as everyone's attention was focused on the screen— BANG on an entirely different stage at the opposite side of the arena, Travis pops up out of the ground.

Ticket holders with standing room on the floor all simultaneously ran to the other side of the arena. It was quite the spectacle.

While watching this incredibly intense performance, I noticed a large “coaster looking” object behind Travis. Before I could even blink, Travis began to walk over to it and you wouldn't believe that it was a “miniature” upside down roller coaster.

Travis started performing while literally going upside down, riding it during one of his songs. He even let a fan get on and ride it too. The amusement park theme was in full effect.

After that, Travis disappeared for just about a minute. Where did he go, we all wondered— and BOOM there he was on the other stage in the arena. Once again, people ran towards that side of the arena. The crowd was in a frenzy and, at this point, I officially declared this to be to be the most exciting concert I had ever attended— and still it wasn't over yet!

An even bigger roller coaster hovered over everyone, then dropped down from the ceiling and Travis strapped himself up and rode it above both stages, all while still performing!

There was never a stop in action and during the more “chill” songs a simulated skyline of Houston was shown on the circular screen going around the arena.

After all of this, all I can say is.... take me back to Astroworld!