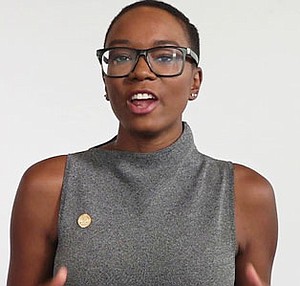 The Black Girls Vote Ball celebrates the accomplishments of black women in politics and activism who are making a difference not only in their community but around the world, according to a news release.

The Rising Star Award is bestowed upon a person for their clear demonstration and dedication to changing the world we live in for the better.

Black Girls Vote, Inc. was launched on what would have been Shirley Chisolm’s 91st birthday— November 30, 2015 in Baltimore.

Through nontraditional engagement efforts that focus on meeting people where they are, Black Girls Vote has registered more than 16,000 voters.

Black Girls Vote (BGV) is also supporting the next generation of leaders and engaged voters through their High School and Collegiate Ambassador Program where BGV Ambassadors activate their student body while bringing BGV’s mission, vision and values on their campus, the organization said in the news release.

This midterm election cycle, under the leadership of Loftin, the NAACP Youth and College Division completed a highly successful Vote 2018 campaign in just a few short weeks, according to Black Girls Vote officials.

They were able to mobilize 5,800 students, recruit and maintain 2,607 new activists, host 232 “vote specific” events, organize at 174 schools across this nation and engage 33 of the 50 states, proving that young people are rising to the occasion and answering the call.