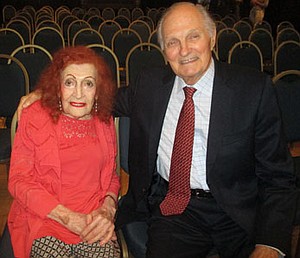 Flo Woolston has quite the story to tell. At 101, she is as sharp as anyone. And, her memory is quite clear.

On July 11, 2018, Woolston, the oldest person living of the legendary former Minsky’s Burlesque showgirls, took a trip to the National Press Club in Washington, D.C., where, after 80 years, she reunited with actor Alan Alda.

“He was two or three years-old when I first saw him,” said Woolston, who danced for Alda’s father, actor Robert Alda back in the 1930s at Minsky’s Burlesque which famously nourished the careers of such later headliners as Phil Silvers, Abbott and Costello, Jackie Gleason and the elder Alda.

She also grew quite close to iconic pianist Liberace.

“I hadn’t seen Alan for all of these years, and to see him again was wonderful,” said Woolston, who grew up in New York but has lived in Baltimore for the past 54 years.

“It was emotional because I hadn’t seen him for all of these years, but it was such a wonderful reunion and we laughed and talked and I told him that he’s old now, too,” Woolston said of the 82-year-old M*ASH star.

Woolston says she and Alda hugged and kissed and exchanged quips.

Woolston said she adored Robert Alda who treated her and other dancers with dignity and the utmost respect.

Robert Alda, who died in 1986 at the age of 72, was a premiere singer and dancer featured in a number of Broadway shows. He sang as Woolston and other women danced around him at Minsky’s Burlesque.

“It was wonderful working with him. He was very unassuming, not conceited and tall, dark and handsome,” Woolston said. “Just a lovely person to work with.”

Woolston recalled New York’s Mayor Fiorello H. La Guardia forced the closure of Minsky’s in 1935 because he said it was too lewd.

“It wasn’t,” she said. “We wore stockings and a G-string. Today that would be considered so mild that probably no one would even come to see the show.”

She says the world appeared to change drastically after World War II, including Hollywood, which started to trend away from black and white films. Even politics became more controversial, according to Woolston.

“My favorite president was a haberdasher, he had a men’s clothing store. He was Harry S. Truman,” she said.

While she earned between $50 and $125 per week as an entertainer, Woolston says that was considered a handsome payday, today’s headliners are wealthy beyond her wildest thoughts.

“I tell young people, by all means absolutely go into entertainment because the money is there even though you may not have such extraordinary talent,” Woolston said.

Although she doesn’t watch many films today, Woolston recalled her favorites: “Lost Weekend,” the 1945 film noir that starred her favorite actor Ray Milland, and 1933’s “Moonlight and Pretzels,” a musical that featured Mary Brian and William Frawley.

“I don’t watch much today and I don’t watch television,” she said. “But, I will tell you the best days were when I worked with Robert Alda, those were glorious days!” 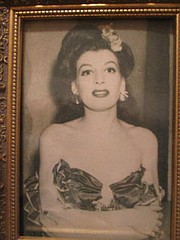 Baltimore resident Kevin Grace has filmed a documentary about Woolston, where people can learn more about her illustrious career and the many big time stars she worked with.