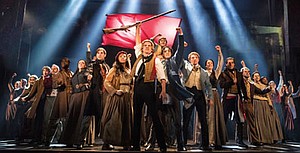 Set against the backdrop of 19th-century France, Les Misérables tells an enthralling story of broken dreams and unrequited love, passion, sacrifice and redemption— a timeless testament to the survival of the human spirit. Featuring one of the greatest scores of all time with thrilling and beloved songs, including: “I Dreamed A Dream,” this epic and uplifting story has become one of the most celebrated musicals in theatrical history.

“Eponine is feisty and a firecracker of a person,” said Paige Smallwood, who plays “Éponine” in the production. “I have a lot of fun playing her.”

Along with the Oscar-winning movie version, Les Misérables has now been seen by more than 130 million people in 44 countries and in 22 languages around the globe. Now in its 32nd year, the show continues to break box office records.

Smallwood talked about how she landed a role in the production.

“I had auditioned for the U.K. tour, but they offered me the opportunity to be a part of the U.S. tour and play the part of Eponine,” Smallwood recalled. “I have been acting since I was a little kid, but my background is in dancing. My mom put me in dance classes as soon as I could walk. One of my first memories is being on stage. Being in this production is an absolute dream come true.

“I am working with some of the nicest people I ever met, and some of the most talented. I thank every person who made it possible for me to be where I am today.”

Les Misérables originally opened in London at the Barbican Theatre on October 8, 1985, transferred to the Palace Theatre on December 4, 1985 and moved to its current home at the Queen’s Theatre on April 3, 2004 where it continues to play to packed houses and is the only version of the original production left in the world.

The original Broadway production of Les Misérables opened at the Broadway Theatre on March 12, 1987 and transferred to the Imperial Theatre on October 17, 1990 running for 6,680 performances. The original U.S. National Tour began in November 1987 and visited over 150 cities before closing in St. Louis, Missouri in 2006. Broadway audiences welcomed the production back to New York on November 9, 2006 where the show played the Broadhurst Theatre until its final performance on January 6, 2008.

The new production is currently playing to sold out houses across North America and in Mexico City with a new U.K. Tour beginning November 2018.

“Performing in the show is almost like a rock concert,” said Smallwood. “It’s crazy. We have a Prologue and an Epilogue. Every night when we perform, we walk on the stage in darkness and the audience erupts in a loud cheer. At the end of the Prologue, the music has a huge downbeat and Les Misérables is projected across the set. As soon as it comes up, it’s like ‘whoa!’ It’s so iconic and the audience just loses it. We are like ‘yes!’”

Smallwood was looking forward to the Baltimore performance.

“I hope that the audience leaves the show with a sense of community, uplifted spirits and feeling that that if we stick together and stay true to ourselves, we can put positivity in the world,” said Smallwood. “It’s a joy to take this production to a different city each week. I am excited to share it with Baltimore. It’s such an awesome community.”

For performances times or to purchase tickets, visit www.Ticketmaster.com, www.BaltimoreHippodrome.com, or call 800-982-ARTS.