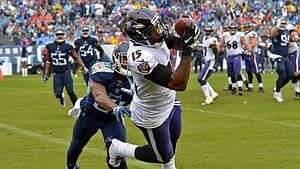 The Baltimore Ravens signed wide receiver Michael Crabtree to be their leading pass catcher and to make things easier for quarterback Joe Flacco. Crabtree's most recent game was somewhat of a redemption outing after failing to haul in the game-winning touchdown in a week 5-loss to the Cleveland Browns.

The Ravens 21 - 0 win over the Tennessee Titans was fueled by Crabtree's six receptions for 93 yards and a touchdown.

"Preparation, working hard at practice and getting back to the basics. That’s my formula," Crabtree said after the game. "Getting back to me. You know, (Joe Flacco) trusted me, you know. That’s big, making plays."

Ravens offensive coordinator Marty Mornhinweg made it a point to get Crabtree involved early. Flacco went to Crabtree on the first play of the game in a drive that started from their six-yard-line. The 25-yard connection got Baltimore out of a hole early and sparked a drive that was finished with a four-yard touchdown catch by Crabtree.

Last Sunday's game was a sign of how things can be if Flacco and Crabtree can connect in the passing game. While he isn't the fastest wideout, Crabtree works the middle of the field very well and makes spectacular catches along the boundary.

Crabtree is becoming a reliable target for Flacco to look for in crucial situations.

"Mike’s (Crabtree) a very prideful guy. He takes a lot of pride in what he does. He wants to be a great receiver, and he wants to impact the game in a positive way for us.," Flacco explained. "He’s a real crafty guy, and he does a really good with setting guys up, especially when you give him a chance to run double moves and things like that."

The tenth-year wideout has caught 30 of the 55 passes that have come his way from Flacco. It's clear that Crabtree is becoming the possession receiver for Baltimore, while speedy wideout John Brown stretches the field on the outside.

The Sunday, October 21, 2018 game game against the New Orleans Saints should afford Crabtree another chance to get plenty of targets. The Ravens will need to pass the ball more frequently to keep pace with the high-scoring Saints offense led by Drew Brees.

There is a lot of pressure that comes with being the lead receiver on an NFL team, but Crabtree wouldn't have it any other way. Life is good for Crabtree and the Ravens when they are winning.