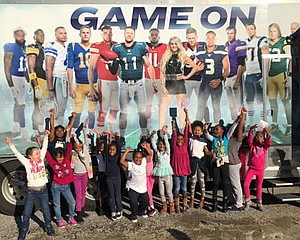 Comcast and NBC Sports collaborated to bring the Sunday Night Football (SNF) Tour bus to the Boys & Girls Clubs of Metropolitan Baltimore to afford youth the opportunity to express their creativity through lively engagement in sports-related activity and ventures.

Part of the central mission of the Boys & Girls Club is to inspire and empower youth in various forms through robust engagement in sports and recreation, education and the arts, and the Club’s mission worked concurrently with the purpose of the SNF Bus Tour.

On the afternoon of October 12, 2018, the SNF Bus made a stop at Webster M. Kendricks Recreation Center in West Baltimore to give students an experience they would perhaps never forget.

Jessica Gappa, director of external affairs for Comcast’s Beltway region, acted as the liaison for Comcast with its Boys & Girls Club partnership. She thought the event had purpose and meaning.

“A lot of our work really focuses on the fact that, to us, success starts with opportunity so we want to give opportunity to the kids, particularly through the Boys & Girls clubs,” Gappa said.

The students involved in the event were mainly kindergarten through fifth grade students most of whom attend Callaway Elementary and are members of the Boys & Girls Club of the Webster Kendricks Branch.

For the duration of the event, the children remained upbeat and jubilant, decorating footballs and participating in various arts and crafts, among other hands-on activities. The day culminated with a tour of the SNF bus, something the students and counselors anticipated with glaring excitement.

The partnership between the Boys & Girls Clubs and Comcast NBCUniversal dates back nearly two decades. In 2014, the two organizations entered a five-year partnership to support the development of MyFuture, which is also designed to prepare students to compete in a digital economy and enhance digital skills and interests.

Jeff Breslin, president and CEO of the Boys & Girls Clubs of Metropolitan Baltimore said he commends the platform NBC and the NFL has bestowed to Baltimore youth for participation in sports and recreational activities.

“It’s really cool. I’m a big believer that nothing unifies like sport,” Breslin said of the SNF Bus Tour event. “To give our kids a chance to see the Sunday Night Football bus and see the power of sports— whether they’re playing or watching— it’s such an incredible opportunity. To give them that opportunity means a lot to us as an organization.”

The SNF Bus generally makes tour stops on the weekends of NFL games, but Baltimore was the first stop that SNF has ever made mid-week, according to Gappa. With the NFL season well underway, the tour bus has also made stops at Philadelphia, Green Bay, Wisconsin; Houston, Detroit; Foxborough, Massachusetts; and Pittsburgh, said Sean Martin, tour manager of the SNF Tour Bus.