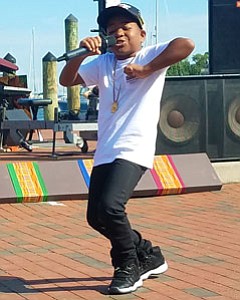 On September 29, 2018, eclectic bands, energetic dancers, talented actors, skilled drummers, performers, conscious poets, vendors and community organizations gathered to celebrate the cultural heritage of the African diaspora in both traditional and new ways at he Kunta Kinte Heritage Festival at the City Dock in Annapolis.

The Annapolis Drum & Bugle Corps kicked off the festivities as a host of officials and stakeholders made a grand entrance behind them. When they reached Susan Campbell Park, Annapolis Mayor Gavin Buckley helped to pass out rose petals to attendees who then threw them into the water to honor loved ones. A short time later, Terrell Freeman continued the tradition of ancestral remembrance through leading a libation ceremony and serving as the event’s emcee.

“We are in for a beautiful day of entertainment,” said Freeman during the official welcome. “Keeping this on line and in point, we are going to move right on into our libations to give praise and due to our ancestors and our creator, and make sure that we are grounded today, for a great celebration today of our heritage, of our city, of our people.”

Tour buses filled with people from N.J. and N.Y. returned to experience another cultural celebration in Annapolis. This year, approximately 8,000 festivalgoers showed up to enjoy festivities on a beautiful rain-free day.

Local kid rapper, “Young Dylan,” who has appeared numerous times on The Ellen Show; and Sim the Poet were headliners at this year’s event. Youth entrepreneurs showed up to sell jewelry, books, accessories, t-shirts and other items. Once again, The Clones of Funk placed a finishing touch on a busy day by delivering pulsating musical beats, which inspired hand clapping and dancing. The group is often known for officially ending fun and fellowship, during the annual festival.

Longtime festival volunteer Danielle Young says that the presence of young entrepreneurs this year was very welcome and hopes that it will continue. She also pointed out that the increased community participation made the festival so much better.

“It felt like the old days. We had an amazing turnout,” Young said. “The support that we received from the community, the vendors and the festival committee was more than I could have ever imagined.”

While looking toward the future, Lee says she will continue her leadership role.

“For next year, we are looking to add some key roles to the team. We are gearing up for the 30th Annual Kunta Kinte Heritage Festival and we need more manpower! Positions available include Vice-Chair, Hospitality Committee Chair, and Sponsorship/Fundraiser Chair,” Lee said. “We are volunteer staff, so we are looking for passionate, motivated people who want to give back to their community and support this wonderful legacy.”