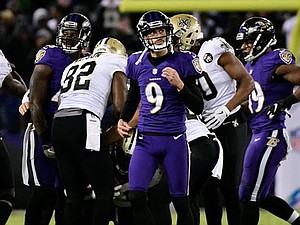 The Baltimore Ravens missed out on a chance to put the NFL on notice when they lost to the red-hot New Orleans Saints on Sunday, October 21, 2018 at M&T Bank Stadium in Baltimore. The Ravens fell just short of tying the game when kicker Justin Tucker missed an extra point attempt late in the fourth quarter.

Tucker vows to turn things around when he takes the field again.

"We are going to keep working on the practice field into more kicks made in games. I feel like I cost us the game. It's a tough thing to grapple with," Tucker said after the game.

Tucker says he wanted to stand in front of the media after the game to be held accountable for the 24 - 23 loss. His desire to face the music is admirable, especially since he wanted to use the humbling experience as a learning moment for his young son.

The Ravens now hold a 4 - 3 record after the loss to New Orleans, but all is not lost. Tucker is still the guy his teammates trust.

Wide receiver Michael Crabtree knows how Tucker feels all too well. He dropped a game-winning touchdown against the Cleveland Browns a few weeks ago but rebounded by making multiple plays in their shutout win over the Tennessee Titans the following week.

"It happens, man. Tucker, that boy is a pro. It's the same thing I went through two weeks ago. He's a pro. I ain't worried about Tucker," Crabtree said after the game.

The outcome of a game can rarely be placed on a single play. The veteran kicker has more than come through for Baltimore in the past and they know he'll come through in the future.

"Justin's the best in the world at what he does. He's the most confident person that I know," quarterback Joe Flacco said.