"Environmentalism" Shouldn't Be A Dirty Word For Republicans 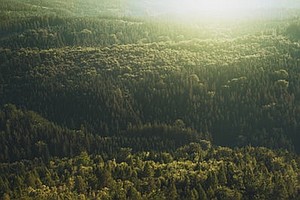 Is there a more despised word among Republicans than "environmentalist?" For many GOP voters, the term conjures up a mental image of tree-hugging socialists hell-bent on regulating our country back to the Stone Age.

That's a shame. The GOP actually boasts a proud history of environmental activism, one grounded in the fundamentally conservative notion that natural resources ought to be preserved.

It's time for Republicans to reclaim that heritage.

Democrats might be the face of modern environmentalism but Republicans started the movement. Teddy Roosevelt was the driving force behind the national park and forest system. Richard Nixon created both the EPA and the National Oceanic and Atmospheric Administration. Republican senators voted in favor of the Clean Air Act, the landmark bill to curb air pollution.

Ronald Reagan once exclaimed, "What is a conservative after all but one who conserves, one who is committed to protecting . . . our rivers and mountains, our plains and meadows and forests . . . this is what we leave to our children."

One threat to our environment is urban sprawl driven by population growth. The United States houses 326 million residents. By 2060, that number will grow to 404 million people.

Cities and suburbs are ballooning, compelling developers to bulldoze lands and habitats. Every three minutes, human activity claims a football-field-sized patch of natural land in the American West.

Texas adds half a million new residents each year and consequently loses about 185 square miles of open space.

In Florida, experts warn that if current trends continue, more than a third of the state’s land will be developed by 2070. This threatens Americans.

Consider food prices. In 1982, America had an average of two acres of cropland per resident. That figure is on pace to drop to near one acre by 2050. As food demand rises and supply falls, food prices could skyrocket for millions of families. Farmers will have to increase their use of fertilizers, pesticides, and herbicides to boost crop yields.

Urban sprawl also destroys the unique identity of communities. At its current rate, by 2060 there could be a 400-mile "seamless corridor of urban development" from Raleigh, North Carolina to Atlanta, Georgia.

The Southeast could become one endless series of subdivisions and strip malls.

At the national level, conservatives could limit future immigration, which will account for nearly 90 percent of U.S. population growth over the coming half-century.

Scaling back "chain migration," which allows legal immigrants to sponsor an endless chain of non-nuclear family members for green-cards, would drastically slow down growth. Seven in ten immigrants come to America via chain migration.

"Environmentalism" doesn't have to be a dirty word. By preserving open spaces and implementing common-sense immigration reforms, conservatives can return to their roots and preserve open spaces for future generations.

Loras Holmberg works as an accountant. He spends his free time as a conservation activist, specifically on issues of human population growth.