Cat On A Hot Tin Roof Playing At Center Stage 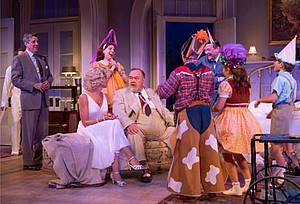 Directed by Tony Award-winning director Judith Ivey, the production encapsulates high drama through a story of family ties and layers of lies on a collision course during one simmering Southern summer night. Themes of morality, greed, and desire play across the stage in this explosive drama about what can happen when illusions begin to unravel.

Uncertainty, secrets and maybe even love, are all on the line to be exposed. With gripping portrayals, original composition and stunning scenery, the production marks the debut of this Pulitzer Prize winning play at Baltimore Center Stage.

“We haven’t done a Tennessee Williams piece in more than a decade,” said Baltimore Center Stage Associate Artistic Director Hana Sharif. “Williams is arguably one of the best playwrights of all times. He specialized in dysfunctional families. We wanted to bring his voice to the Baltimore community.”

Sharif added, “Cat on a Hot Tin Roof is a period play, but the ideas are still very relevant in 2018. The play presents the whole idea of having to hide and masque dysfunction and suppressing your truth. We thought the presentation of this play was a great opportunity to launch our season.”

Sharif says she was the producer of the production.

“I helped to put together the creative team,” she said. “I helped guide the process to make sure it moved seamlessly. I had the opportunity to bring Judith Ivy on as director. She is a Tennessee Williams aficionado. Most people know Judith from her movie and television work. But she is also a phenomenal stage director who specializes in, and loves Tennessee Williams plays.”

When asked what she thought the title Cat on a Hot Tin Roof represented, Sharif responded: “I think it’s a metaphor of being trapped in a condition. The heat of Maggie’s situation is burning her alive, but she can’t jump off. She and her husband Brick are tied to each other. She wants him to forgive her for betraying him. They are living in a hell they have constructed for themselves. But in the end, there is a way out of the construct they have created in their marriage for something better.”

Sharif shared a special real-life connection between Brick and Maggie.

“They are actually a married couple,” she said. “It has been fun to have them in the show. Their performance in this show represents their first time working together in a production on stage. It’s such a sweet way to celebrate their marriage.”

Located at 700 N. Calvert Street, Baltimore Center Stage is a professional, nonprofit institution committed to entertaining, engaging and enriching audiences through bold, innovative and thought-provoking classical and contemporary theater. Baltimore Center Stage’s 2018-19 Season is made possible by The Shubert Foundation, the Baltimore County Commission on Arts and Sciences, and in part by a grant from the Maryland State Arts Council (MSAC). Cat on a Hot Tin Roof is supported by DLA Piper and T. Rowe Price.

“This production is a real snapshot into a moment in time,” said Sharif. “It is funny to look at a play of the 1950s and see that the drama of secret lies and of family dysfunction are still present. It reflects who we were as a country in the 1950s, are there are nuances to it that are very engaging. A Tennessee Williams play that has been bought to Baltimore is a great opportunity. I would say to everyone, don’t miss it.”

For more information about Cat on a Hot Tin Roof or to purchase tickets, call the Center Stage Box office at 410-332-0033 or visit: www.centerstage.org