Meeting The Temptations, A Dream Come True For 15-Year-Old 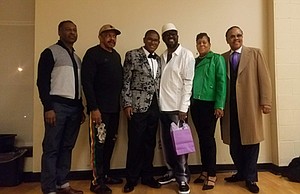 As another Christmas holiday-giving season is nearly upon us, random acts of kindness never go out of style. This time of year, people are often in search of the perfect gift to give to friends and loved ones. However, a kind gesture exhibited by Dr. Otis Williams and his fellow Temptations members reminds us that giving time to someone is one of the most precious gifts of all.

Despite a rigorous tour schedule, Williams, the founding and only surviving member of the original Temptations line-up, made one Maryland young man’s wish come true on the evening of October 26, 2019 at the Lyric in Baltimore City.

Fifteen-year-old Eric Carpenter-Grantham smiled widely when he came face-to-face with Williams before the Temptations sang their hit songs in front of a packed house of all ages. Eric, who just celebrated his fifteen birthday, embodies the idea that life is a gift that should be embraced each day.

In 2016, the teenager underwent heart bypass surgery and even though he still experiences symptoms of heart block, suffers from asthma, has some speech delay, and lives with high functioning autism spectrum disorder, he has made three gospel CDs, which should remind everyone about the value of determination and having a positive outlook.

Williams’ celebration of life is an inspiration. The widely acclaimed artist turned 78 in late October but his energetic spirit and undeniable talent remains engrained in countless hearts and minds around the globe.

“In 1961, the Temptations started. We’ve been rolling ever since,” Williams said in an exclusive interview with The Baltimore Times. “It’s great when you can touch people of all walks of life as young as they are, all the way up to seventies and eighties and ninety years old. So, we cover a lot of generational span for touching people’s hearts and spirit.”

Eric Carpenter-Grantham, 15, (left) recently celebrated his 15th birthday. Despite having heart surgery at the age of 11, managing autism spectrum disorder, speech delay and asthma, the spiritual teenager from Sliver Spring, Md. who is a gospel artist has not stopped living his dreams. Eric says that other kids with autism can be whatever they want. Eric loves very old music and has made three gospel CDs. His mother, Linda Carpenter-Grantham (right) raises her son with

Williams’ personal journey spans from Texarkanka, Texas to Motown and global superstardom. The group was even named the #1 R&B Artists of All-Time, according to Billboard. Even so, the group’s achievement surpasses the millions of albums that have been sold. The Temptations continue to inspire a new generation of new fans like Eric, in addition to other fans of all ages, from a variety of walks of life.

“It just shows you that music can cast a long, living spell. Music is boundless. Music can bring people together,” Williams said. “It’s very inspiring when a young man such as himself (Eric) admires us and our singing, and wants to meet us all through the efforts of us singing. It inspired him to want to meet us. That’s a big, huge compliment. And then to know what he’s dealing with as a far as himself, that’s even more inspiring.”

The Temptations and Eric have something else in common: growing up singing and appreciating gospel music. Faith in a higher being is prominently showcased through the way Eric wears the word “Jesus” cut into his hair.

His mother, Linda Carpenter-Grantham says that her son always asks God to make his dreams come true, including when it comes to meeting singers and other well-known people that he admires like the Temptations. She added that it has been Eric’s wish to meet The Temptations, ever since he saw the movie back in the summer.