Jets Bring A Number Of Former Ravens To Baltimore 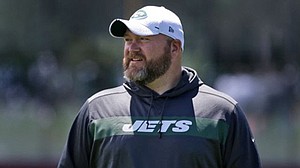 The Baltimore Ravens will host the New York Jets at M&T Bank Stadium on Sunday. It will be a homecoming of sorts for a number of players and front office people on the Jets.

Linebacker C. J. Mosley is the most notable former Raven on New York's roster, but he won't be suited up in Sunday due to a season-ending injury earlier this year. Mosely's presence is missed by both his former and current team.

"I miss C. J. and wish he was here," Ravens head coach John Harbaugh said with a laugh. "We love him and appreciate everything he did for us. It’s a tough break with the groin, but he’ll bounce back. He’s a great player, a hard worker and a good guy."

Jets head coach Adam Gase said it was tough losing a player of Mosely's character in both of their first years in New York. Gase called Mosely an outstanding leader and almost like a coach on the field. His absence has caused other players to step up.

The Jets added other former Ravens such as RB Ty Montgomery and DB Maurice Canady among others to their roster. Jets offensive assistant Todd Washington was an assistant offensive line coach for the Ravens from 2011-2016. New York's GM Joe Douglas cut his teeth as a personnel guy under Ozzie Newsome and Eric DeCosta in Baltimore.

Gase doesn't seem to think it's a coincidence that so many former Ravens have ended up in New York's roster.

"It just seems like the way that they've always done everything. It probably starts with Ozzie [Newsome], and really, it's about the locker room," Gase said via conference call. "And it's the right kind of guys getting in there, and they're guys with the right kind of attitude and work ethic. All the guys that we have that have come from there have always been some of our better-type teammates in our locker room that just seem to do everything right."

The Jets rebounded from a bad start to post a 5-8 record. They aren't in the bottom of the AFC East, but they don't have a real shot at making the playoffs. At 11-2, the Ravens are the top seed in the AFC.

Baltimore's sustained success is one of the reasons why their roster gets pilfraged through free agency every year. Harbaugh doesn't hold any grudges towards the guys that leave for better opportunities. He actually applauds them.

"I do think we’ve had really good players, and you’re happy when you see them go other places and do well and sign big contracts— you really are. As a coach, you want to see guys make a difference for their families and their lives and stuff like that," Harbaugh