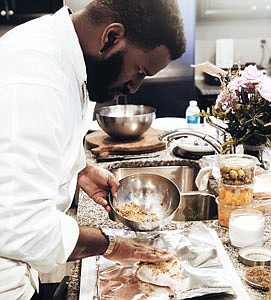 It’s easy to think that personal chefs cater only to the rich, famous or those who might be on the fringes of wealth and celebrity.

However, many top-notched cooks, like Baltimore’s Dorien Murphy, regularly answer the call to pack up his pots and pans, spices and all the groceries needed to make delicious meals for every-day folks.

With a solid 5-star rating on Thumbtack, an online service that matches customers with local professionals, Murphy counts as a chef and owner of the culinary business, Cheffin.

“My interest in cooking began at a very young age. At five years old, my passion for cooking was inspired by my parents,” said Murphy, who attended Morgan State University and later earned a degree in culinary arts from Baltimore International Academy, Murphy.

After a start in the industry as a cook at the Elkridge Country Club in Baltimore where he said he honed his skills, Murphy now is making a name for himself, cooking for businesses and private clients in Baltimore, Washington, Philadelphia and New York.

“[My Parents] always playfully battled in the kitchen. Mom had the best sides while Dad made the best ribs and sauce,” Murphy said.

“That passion was expounded upon as I watched primetime Food Network programming.” Emeril Lagasse, Bobby Flay, and G. Garvin are among Murphy’s favorite chefs, he said.

Wow, he’s thrilled with business, Murphy noted that the culinary industry has never been easy and he’s has had his share of challenges.

“Balancing my love for business and culinary arts was the initial challenge,” Murphy said.

“The next challenge was centering the Cheffin values around health and creating menus that were uniquely wellness based that clients would buy into. The solution to both challenges was found through passion, perseverance and patience,” he said.

When he’s hired to cook for families in their homes or at other locations, Murphy readily informs his ultimately satisfied customers that he has a few favorite dish combinations that are inspired by the art of French and Italian cuisine that’s delivered with an American flare. 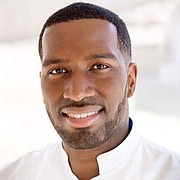 Among those are his Chilean Sea Bass with Rosemary Forbidden Rice, Corn Bisque, and Scorched Sweet Peppers.

“The Chilean Sea Bass is a warm and renewing dish. I love how hearty yet delicate the bass is. Its flakiness lends well in consuming complete bites of the corn bisque and forbidden rice,” Murphy said.

“The scorched sweet peppers add some smokiness to the dish where all other components are light in flavor. It is definitely one of my favorites for sure,” he said.

“The winter salad is a joy and refreshing like the first snowflake of the season upon your tongue. I love how robust and healthy baby kale is,” Murphy said. “It really holds well on the plate and bonds with the stab of your fork. Baby kale is lightly bitter, it pairs with the sweetness of the spiralized beet and maple vinaigrette.

“The beet compliments the salad with a subtle saccharine tartness. Its crunchy sweet texture helps balance the acidity and harsh licorice of the rice wine vinegar,” he said.

While historically, African Americans haven’t received much acclaim as top chefs, Murphy said that too is changing.

“Black chefs have distinctive relationships with flavor and cooking that add tremendous value and variation to the culinary industry,” he said.

“It is very difficult to deny or prevent the progression of food and African American culture is an integral piece of this growth.”