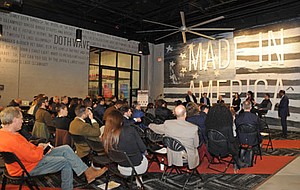 “The Future Of Charm City” was a night of networking, collaboration and discussion with telecommunications giant AT&T and local tech hub Betamore that involved a panel of tech pioneers, creative entrepreneurs, community leaders and business executives who came together to discuss the future of technological innovation in Baltimore, and how the growing technology sector is affecting the region across different industries.

The event, presented by AT&T in conjunction with Betamore, was held on January 24, 2019 at the City Garage. Event attendees had the chance to get an up-close look at small cell equipment, which is paving the way for the next generation of mobile technology.

The panel discussion was moderated by Thiru Vignarajah, former Maryland deputy attorney general. He opened the discussion by highlighting the promise that Baltimore has despite its deplorable reputation.

“What we want to do tonight is to talk a little bit about how technology, in particular, is going to advance the future of Baltimore,” Vignarajah said.

“We talk a lot about what’s wrong with the city. What we’re going to do tonight is talk about what’s right, and what could set us on the path to becoming the 22nd-century city that Baltimore is destined to become.”

Moreover, the panelists shared their thoughts on the future of Baltimore’s purported burgeoning tech industry. Some of the topics discussed were how various sectors of the community will benefit from the expected technological advancements coming to the city, such as law enforcement, the transit system, education and job creation. Small-cell infrastructure was also a major point of emphasis.

Following the panel discussion was a brief Q&A session in which the audience asked questions concerning advancements in technology and the arts, in healthcare technology and small-cell technology’s impact on the city.

Small cells are small, unobtrusive equipment that can be placed onto existing infrastructure (light pole, building, etc.) and are vital components of the future of technology. According to the American Consumer Institute Center for Citizen Research, small-cell reforms and developments can lead to an estimated 6,427 jobs in Maryland along with a $9 billion Maryland Gross State Product.

A recent report by Technically Baltimore notes that over the next 10 years, AT&T plans to install thousands of small cells across Maryland. Antenna systems installed on light poles and buildings could help usher in 5G technology - a term used to describe the next generation of blazingly fast mobile networks beyond the 4G LTE mobile networks of today - which is already starting to appear in various locations around Maryland, Blakeman said.

Blakeman said Baltimore is at the precipice of a cybersecurity breakthrough, and expressed what importance that technological infrastructure will have for the city as 2020 approaches. He encouraged the audience to be ‘digitally responsible’ and that they have a role in building the infrastructural network that may revive Baltimore City.