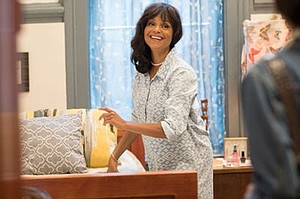 A new feature series, “Jacqueline and Jilly,” currently airing on the Urban Movie channel, will be screened at AMC Owings Mills 17 Theatre on Friday, January 11, 2019, is the story about one family.

The series, which has already received critical acclaim was written, produced and directed by Emmy-nominated actress Victoria Rowell.

“In my opinion, the functionality of the entertainment industry should not solely be to entertain but should also be used as an awareness mechanism for calls to action in any crisis,” said Rowell, renowned for her roles in Eddie Murphy’s “The Distinguish Gentlemen,” “Diagnosis Murder,” “Dumb and Dumber,” and other movie and television hits.

“My hope is that Jaqueline and Jilly will inspire spirited conversation between families and communities while also encouraging legislative limitations on pharmaceutical distribution.

“I’m hoping this inspires transparent conversation that people will be empowered to want to help in communities who don’t have the help and medical support they should have.

“I’m hoping people will write their legislators about managing doses. These [opioids] are powerful pharmaceutical drugs that are meant for end of life, they were never meant to get into the mainstream of public medical care,” she said.

“People walk into hospitals for routine surgeries and they walk out addicts,” Rowell continued. “Once a patient can’t get the pill they’re addicted to, they often turn to the streets for heroin and that often leads to HIV.”

In “Jacqueline and Jilly,” political careers and societal privilege create distance between Jacqueline and her husband, Magnus Mitchell, a District of Columbia lobbyist. Their over achieving daughter, Jilly, who is in her 20s and an aspiring photographer enrolled at Hampton University, has long felt the strain and neglect, and turns instead to her bohemian boyfriend, Paul, for comfort and attention.

Unnoticed, Jilly develops a growing addiction to prescribed opiate painkillers due to a fall from her thoroughbred horse.

News of a car accident causes her busy parents and doting grandmother, Zillah Stewart, to rush to her side. Addled by denial, Jacqueline and Magnus regard their daughter’s addiction as an embarrassing nuisance, disrupting the status quo.

As this family unravels the truth, Jacqueline recommends the posh safety of their Chesapeake Bay home as a part of Jilly’s ongoing recovery. However, Jilly has another idea. Secrets that have haunted the Mitchell’s are unlocked at a rustic lodge setting healing these three women like never before.

“I’m proud of [media mogul] Bob Johnson for giving me a platform to provide quality content. Opioid addiction is colorblind, it’s class blind,” Rowell said. “I want this to be an awareness mechanism; to use its powerful weight in bringing awareness. I’m hoping that Jacqueline and Jilly inspires conversations between families, communities and friends.”

Rowell says she is also proud of being at the wheel of the film and series, as producer and director.

“With three black female writers… it once again validated my journey of having worked with big networks and not seeing my reflection in so many cases … this has given me an opportunity not only to create content I believe is important and might save lives, but hire people who don’t get opportunities, people who are remarkably and incredibly qualified who just need the opportunity,” Rowell said.

Rowell says that the takeaway from Jacqueline and Jilly is that it offers hope.

“We see TV shows, movies and documentaries that are incredibly tough to watch and I think a lot of the content lacks hope. So, Jacqueline and Jilly offers hope. It offers hope of recovery and I’ve written it with a dash of humor because life is hard enough,” Rowell said.

The actress says it’s important that everyone knows that there is a hotline, 800-662-HELP. Rowell also suggests using the #jacquelineandjilly on social media where she can be found @victoriarowell.

For more information about the series, Jacqueline and Jilly, visit: www.JacquelineandJilly.com.