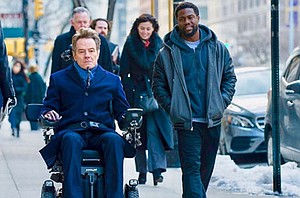 On paper, a story about a low-income black health-care aid who is befriended by a rich white male quadriplegic sounds suspect. Patronizing films like Driving Miss Daisy come to mind, and potential filmgoers upon hearing the plotline may feel anxious, angry and nauseous all at the same time.

On-screen, The Upside, an American remake of the 2011 Cesar-winning French blockbuster called Les Untouchables, which launched the career Omar Sy (Jurassic World, X-Men: Days of Future Past), is iffy but still quite touching. Three-dimensional compelling performances by Bryan Cranston (that is to be expected) and Kevin Hart (a welcome surprise) are its saving grace.

Kevin Hart fans may think that this role of an underling is beneath their favorite comedy actor. Instead they should view it as an opportunity to see him show more than his class-clown approach to performing. Thrown into the deep-sea depths of a dramedy, Hart proves he can swim just fine.

Dell (Hart), a young man with a criminal past is behind on his child support payments; pity his wife (Aja Naomi King, The Birth of a Nation) and son (Jahi Di’Allo Winston, The New Edition Story). He needs a job and money in a bad way. Dell haphazardly gets a position as a caregiver for a wheelchair-bound, millionaire, author Phillip (Cranston), a grief-stricken widower. Queue the violins! How rich is he? Only boxer Floyd Mayweather has more high-end cars in his garage.

Dell’s budding relationship with Mr. Moneybags, is heavily scrutinized by a snoopy secretary, Yvonne (Nicole Kidman). Yet, the two men learn a lot from each other— apparently opera music is not so bad, and Aretha’s Franklin’s voice can light up a room and a friendship forms.

Screenwriter Jon Hartmere takes the real-life experience of Tunisian-born French businessman Philippe Pozzo di Borgo, who became a diabetic quadriplegic in 1993 after a paragliding accident and Americanizes it. The social and racial dynamics in the U.S. are different that those in France (more progressive), so the entire premise feels passé—boarding on offensive— even with a modern New York setting. That said the nuts and bolts of the screenplay are short on sentimentality and long on the viable bromance.

Director Neil Burger (Divergent) knows when to pepper scenes with comic moments and when to season lightly with pathos. Nothing on-screen is awful, but not much stands out: musical score, Rob Simonsen; cinematography, Stuart Dryburgh; editing Naomi Geraghty; and production design Mark Friedberg.

Performances by Cranston and particularly Hart save this film from the trash heap. The former eats drama for breakfast. Crusty, scruffy roles in Trumbo and TV’s Breaking Bad chart the Oscar-nominated actor’s rise into the upper echelon of serious actors. His interpretation of the lost-in-angst Phillip is just another well-conceived portrayal.

Hart, a standup comic who churns out comic movie roles as if he is in a factory that has to meet a deadline, is a different story. Working his way through the Ride Along franchise, Think Like a Man and The Wedding Ringer didn’t prepare him for weighty roles. Yet somehow, he manages to dig deep enough to delve into both sides of Dell: the hustler, the caring friend. Scam artist traits are in Hart’s wheelhouse. The more sensitive moments with Phillip require nuances in emotion that he manages to summon quite nicely. It makes you wonder where his career could go if he took more artistic chances. Is Othello in his future? Not likely. But judging from what’s on view, he’s only scraped the surface of his full potential.

If prospective moviegoers can’t get past the film’s premise, so be it. If they can, they’ll watch a shallow film become a touch deeper because Cranston and Hart create an authentic chemistry.

The syrupy sweet Les Untouchables won France’s highest film honor, a César Award, and so did Omar Sy. It’s unlikely that “The Upside” will achieve such accolades but the performances but Cranston and, especially Hart certainly rate praise.