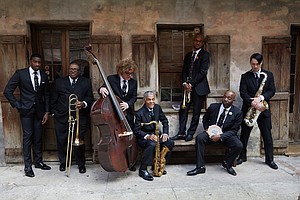 Founded in the early 1960s by tuba player Allan Jaffe, the Preservation Hall Jazz Band aims to preserve the history of New Orleans jazz while providing a fresh take on the popular genre through collaborations with cutting edge artists such as Stevie Wonder, Elvis Costello, the Grateful Dead, Arcade Fire and the Black Keys, according to a news release.

After Allan Jaffe’s passing in 1987, his son Ben Jaffe became the band’s artistic director, touring with the band and playing double bass and tuba.

Fulfilling his late father’s dream of visiting Cuba to retrace their musical roots, the band’s documentary, “A Tuba to Cuba,” follows the band’s 2015 trip to Cuba in search of the indigenous music that inspired New Orleans jazz.

“I see [passing on the band’s traditions] as something that's necessary for the evolution and survival of New Orleans music,” Jaffe stated in a news release. “Interpreting the repertoire that’s been around for a hundred years is one thing, but the challenge is to keep that repertoire and those traditions alive while at the same time being honest about who you are as a musician, allowing all of your musical influences to be reflected in what you create.”

They became the first band to perform at both the Newport Jazz Festival and the NewportFolk Festival. The band recently released two new albums, the “Preservation Hall Jazz Band 50th Anniversary Collection,” and “St. Peter & 57th St.,” a recording of their Carnegie Hall performance.

Bringing together the sounds of Dixieland and the rhythm and soul of Cuban music, Preservation Hall Jazz Band has thoroughly established itself as one of the important, innovative bands of jazz music.

The Joseph Meyerhoff Symphony Hall is located at 1212 Cathedral Street in Baltimore City. Tickets are available through the BSO Box Office at 410-783-8000 or at: BSOmusic.org.