A Salute And A Surprise For Vets 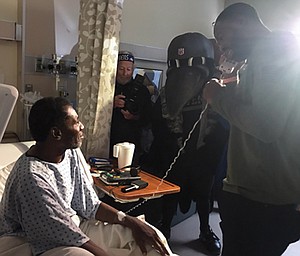 Excitement filled the air at the Baltimore Veterans Affairs (VA) Medical Center as the Baltimore Ravens and national defense and tech firm Leidos showed their appreciation for the men and women who served in the armed forces. Former Ravens wide receiver Torrey Smith headlined the surprise visit November 14, 2019.

“Many of them do not know what’s in store today,” said Adam Robinson Jr., director of the VA Maryland Healthcare System. “The cheerleaders, Torrey Smith, mascot Poe, they’re going to love it.”

Robinson, who has been the director of the VA Maryland Healthcare System is the 36th Surgeon General of the United States Navy. 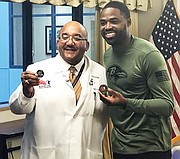 "Everything that we can do as a community to show our interests in our veterans, and to show our support for our veterans makes for a wonderful condition for them to heal, '' said Robinson.

That’s why Smith showed up. He said everyone should be doing what they can to support veterans especially at a time when they may need cheering up at the VA.

"I’ve always understood the importance of giving back and the most valuable thing you can give to anyone is time,'' said Smith. "I understand their sacrifices and their commitment, very selfless of them to literally put their lives on the line for our freedom and our rights.”

Smith said he has a special connection to vets because his father served in the army for over 20 years.

Lewis Walden Jr. was the first veteran that Smith surprised when he walked into Walden’s room handing out memorabilia.

“I’m just so happy. I don’t know what to say. I’m like a kid in a candy store. It really made my day,” said Walden. He was so surprised that he called his wife to tell her Smith was in his room.

Walden, 65, served 17 years in the Army Special Forces between active duty and reserve as a Staff Sergeant.

“I encourage every young man, every young woman to think about investing in their future. You can’t beat the military,” said Walden.

John Wells was the second veteran surprised by Smith.

"These folks are from Maryland, and as long as they’re not cheering for the other team in Maryland they'll be very excited to see the Ravens," said Smith.

The VA visit was followed by the Ravens’ Salute to Service game November 17, 2019 against the Texans during which military Veterans and active duty service members were honored.