A LOT to be Thankful For 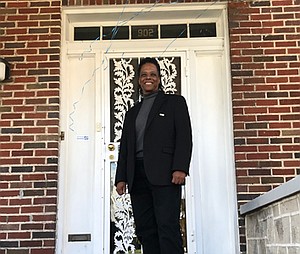 Vaile Leonard walked into a bedroom of the rowhouse on Wheeler Avenue. She took a trip back down Memory Lane.

“This used to be my bedroom as a child,” she said as she looked around the room. “I am filled with emotion. Standing here in my room reminds me of the love my family had for me and their service. They’re the reason why I am driven towards service and so God-oriented.”

It is complete joy and gratitude. I am so grateful. It’s also another way of sharing a piece of me with the women we serve.”

A moment of reflection for Vaile Leonard as she stands in her childhood bedroom.

The house on Wheeler Avenue is one of two new residential locations operated by the Light of Truth Center, Inc. (LTC). On November 14, 2019, LTC held a private Open House there, along with one at another location on Lafayette Avenue. The showing was for donors and other supporters, and included a tour along with light fare. A public Open House was held at both locations on Saturday, November 16, 2019.

“We work with women all the way through their recovery,” said Leonard. “Each home represents a step in that process. Recovery, transition, and restoration.”

Founded by Leonard, LTC provides residential therapeutic treatment for women recovering from addictions. Women living in the homes work on a self-improvement plan while living as a family unit to support their own and each other’s recovery process. The homes have been credited with helping dozens of women overcome drug addiction. 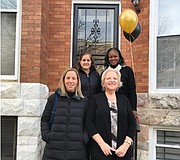 According to Leonard, the Wheeler and Lafayette Avenue locations will house five women at a time. She said LTC will open their newest locations once they have received state approval. The Lafayette Avenue location is called the Sollins-McCarthy Center. Like its counterpart a few blocks away on Wheeler Avenue, the Sollins-McCarthy Center is also deeply rooted in Leonard’s family.

“My mother, grandmother, great-great grandmother, and great aunt all lived in that house,” said Leonard who is a former heroin addict. “I can still feel them there. There is peace and tranquility in that house and in all of the houses. We want the women who come to Light of Truth to do better and be better. Staying in a nice place also gives women something to aspire towards. It makes them feel that owning a home can be a reality for them one day.”

Leonard reflected on why she decided to start LTC.

“I went into a house that women were living in squalor,” she said. “I had a spiritual encounter at that time. People tend to believe that people in recovery should be grateful to live wherever in whatever they get. Our houses are so much more than that. We make the women feel like family, and not like they are living in a facility.”

The dining room area of the Sollins-McCarthy Center.

Ginny Robertson is president of the Light of Truth board of directors. The basement area of the Sollins-McCarthy Center is named the “Don and Ginny Robertson Library” in her and her husband’s honor.

“The houses are peaceful and cared for,” said Robertson. “The women are coming in from not-so-great circumstances. We want these houses to be much nicer than where they came from.”

“A friend of mine who had over thirty years in recovery told me about Light of Truth,” said Scott. “I was going to stay for a week and then say I wasn’t interested. That was over two and a half years ago. I am still here. I love the organization and the love Vaile Leonard shows to each individual. She motivates everyone and brings out the best in people.”

For more information about LTC call (443) 414-7562 or visit www.lightoftruthcenter.org.