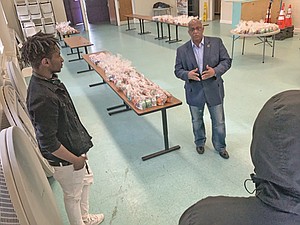 As recently as January, Baltimore City Police reported that they were receiving about eight calls each day from residents complaining about squeegee kids.

Complaints ranged from menacing to fear of property damage and injuries that could result from aggressive attempts by the squeegee kids to wash motorists’ windshields to earn a buck.

Today, thanks to a program instituted through Mayor Jack Young’s Office of Children & Family Success, the squeegee kids are a welcome sight and distraction from the COVID-19 pandemic.

Many have been hired to give out meals to the needy, particularly families who depend on school lunches as all education facilities have shuttered indefinitely as the crisis rages on.

The squeegee kids receive $50 each day— or $250 per week— for delivering the food, and based on a recent estimate, they’ve already handed out about 10,000 meals.

“The kids [have done] an amazing job, and they were grateful to have a chance to help. In the coming weeks, we’ll continue to look for ways for these young people to support our emergency response efforts,” Edwards said.

When they’re not delivering food, the workers trek door-to-door to let people know about where they can find meals. They are also reminding the public to wash their hands and practice social distancing.

Officials say that the change in attitudes toward the squeegee kids has been noticeable. One official told local television news reporters that they are “seeing a lot of people saying thank you.”

“A lot of the youth who squeegee are out on the corners because there is a financial need they're trying to meet. So, we want to support them in meeting that financial need in a productive way,” Ed Hawkins, a program official, told the Baltimore CBS News affiliate.

“I want to see everybody live a long life,” said Tony Brown, a squeegee worker.

Squeegee Alternative Plan participants are enrolled in a one-year program in which they receive a mentor, job training, and an opportunity to earn an income.

“The city’s Squeegee Alternative Plan is where we work with youth who squeegee to develop social capital and access to safer, more sustainable ways of earning income,” Edwards said.

A vital element of the plan is pairing youth with opportunities to generate income while developing personal growth and job skills, Edwards noted.

“Providing meals to families at our public housing communities during this time of extraordinary need gave 13 youth both a modest stipend and an opportunity for meaningful engagement,” she said.