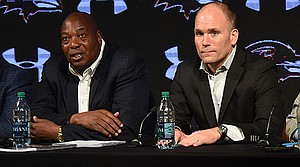 Ravens head coach John Harbaugh will be one of the many shot callers across the league now required to handle business from their homes instead of the team’s war room. The race is now on to build an efficient and secure means to communicate in the new virtual environment.

The need for a secure network extends to playbooks being distributed to players and virtual meetings. Harbaugh isn’t a fan of the new way of doing things.

“It’s a big concern. Hopefully, we’ll be okay,” Harbaugh said via his pre-draft press conference. “I really wouldn’t want the opposing coaches to have our playbook or our draft meetings. That would be preferable if we can stay away from that.”

Harbaugh pointed out when a company faces a security breach where personal customer information is stolen. Now the Ravens’ tech support team becomes a more important part of the team.

Ravens General Manager Eric DeCosta doesn’t have the same concerns. He even joked about it.

“I have more confidence in Zoom than I do in Ozzie [Newsome], John, Steve [Bisciotti], and Dick [Cass], with a copy of our draft board that they just leave in the car on their front seat or something like that,” DeCosta joked.

Precautionary measures for the Coronavirus caused prospect pro days to be canceled along with team visits. Measurables are not as much of a variable in the draft evaluation process this year. Teams aren’t able to get their hands on players during private workouts.

That pushes teams to focus more on the actual game film. Traditional NFL evaluators like the Ravens hold an advantage because the film is what they always placed the most emphasis on.

“I don’t think our draft preparation is really going to be that much different from what we’ve been accustomed to,” DeCosta said via the team site. “It’s going to be old school. It’s like the 80s have come back and we’re just going to sit here and watch tape.”

Prospects that would have been at local pro days at the team facility won’t have the opportunity to showcase their talent in front of team personnel. There are a number of prospects that help set themselves up for an un-drafted free agent contract after catching an evaluator’s eye during team workouts.

The Ravens are not strangers to leaving stones unturned. One of their best finds was kicker Justin Tucker who was recently named to the 2010 All-Decade team. They don’t seem concerned about being unable to spend as much pre-draft time with prospects to mine gems in the draft.

“Historically we’ve done a good job with the guys that aren’t invited to the Combine and non-all star guys,” Hortiz told the Ravens site. "Our scouts do a great job of getting the information from their sources at the schools— the trainers, the strength coaches. So, we have a lot of estimated 40 [-yard dash] times. Our analytics crew can help us with that as well. They do a great job of getting information, so I think we can get the

"They're in HBCU's, they're in D-II's, and they're in D-III's. We have a number of guys who we've talked about over the course of this scouting season from those types of schools. So, they've been evaluated. Maybe we haven't been to their Pro Days, but again, our scouts do a great job of getting information."