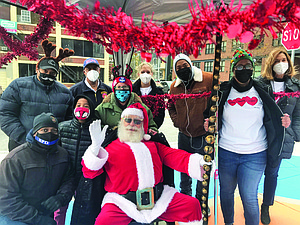 Millie Brown reflected on the conversation she had with seven-year- old Jerrod Murray, a youngster she describes as being ‘the face behind’ her newly-formed organization Little Hearts United. The organization supports children who have lost loved ones to violence.

“I told Jerrod my name and we started talking,” recalled Brown. “He asked if I knew his twin brothers had been killed. He also told me his father and cousin had been killed. It broke my heart. I prayed and asked God what He wanted me to do. I also talked with my son, who said that I needed to ‘get those little hearts together.’ That’s how we came up with the name.” 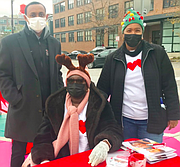 Supporters of Little Hearts United handed out children’s identification kits and insurance information at the event.

According to Brown, more than 100 new coats were distributed. She said the giveaway was made possible thanks to the efforts of many, including WBAL Radio, who has teamed up with Burlington for the past eight years as part of its Coats for Kids campaign.

“The event was amazing,” said Brown. “It was nice to give the children a coat and put a smile on their faces. It lets them know there are people in addition to their family and friends who love and care about them.”

The giveaway was preceded by a registration event on Saturday, November 21, 2020 at Giant on E. 33rd Street.

“We gave coats to those who registered along with people who were not registered,” said Brown. “People were pulling up in cars and saying their children needed coats. Miss Millie just couldn’t say ‘no.’ They were so grateful and thankful. I saw it in their eyes, and it touched my heart.”

Brown is also the founder of A Mother’s Cry, a local organization that supports mothers who have lost children to violence. She talked about Faith Millspaugh, who serves on the organization’s Board of Directors.

“We have had 300 people killed this year, which has left many children behind,” said Brown. I talked to Faith and told her I also wanted to help children impacted by violence. She told me, ‘Miss Millie you can do it.’ Faith has stuck with me and has been such a blessing.” Millspaugh also shared ‘heart-felt’ sentiments for Brown.

“I met Millie and was so inspired by what she does,” said Millspaugh who also donated heart-shaped cookies for the event. “I believe Baltimore is a wonderful city, but like other cities, has big problems. We need to support our children.” Millspaugh distributed coats at the event along with her daughter, Olivia.

“We are waiting on 501c3 status,” she said. “It’s all about organizing this organization for ongoing success. Millie Brown and these children stole my heart.”

Chick-fil-A sponsored the food. Brown’s son Will Brown gave out free prints at the event and presented portraits to two mothers who lost their sons to violence. Sponsors also included, the Baltimore City Fire Department, who donated gloves and other items.

“My Chief of Staff, Amy Beth Leasure came into contact with Millie Brown and wanted to figure out a way to have the Fire Department participate in some way with her organization,” said Chief Ford. “Considering the fact that the Baltimore City Fire Department are often on scenes where a lot of these children’s parents wind up losing their lives to violence, this is a good fit for us.

Tynette Robinson holds a portrait of her son Devonte Robinson who was killed in 2019. She is pictured with artist Will Brown.

The Fire Department is called fire service and from my perspective, service moves beyond fire and EMS calls. We can make a different in people’s lives.”

“It is fantastic to see the kids receive coats and love from the community. You can’t see their mouths because of the masks, but you can see their eyes smile.”