Baltimore Sixth District Councilwoman Sharon Middleton: A Woman Who Makes The Most of Her Opportunities 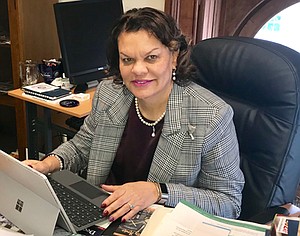 Opportunities seem to always come Sharon Middleton’s way and the Baltimore Sixth District Councilwoman has always managed to make the most of them. She recalled being told about a job opportunity at Hochschild Kohn’s department store one day while she was walking down the mall with hair rollers in her head. She got the job.

“When I got on the Baltimore City Council, Helen Holton and Rikki Spector were members of MACo,” said Councilwoman Middleton. “They said it was an organization I needed to belong to because it was good to know colleagues around the state and country and also a way to obtain best practices. I joined and immediately started going to conferences. I eventually worked my way up to be on the Board.”

MACo is a non-profit and non-partisan organization that serves Maryland’s counties by articulating the needs of local government to the Maryland General Assembly. The Association’s membership consists of county elected officials and representatives from Maryland’s 23 counties and Baltimore City.

“I worked my way up to Second Vice President and then First Vice President,” said Councilwoman Middleton smiling as she reflected on the words of her late mother, Martha. “My mother always said to me, ‘you never had a problem finding a job. The job always came to you.’”

The former teacher now serves as President of MACo, becoming the first African American from Baltimore City to hold the position.

“Periodically, I testify in Annapolis,” she said. “Part of my charge is to promote Baltimore City. People forget about this, but Baltimore City is the economic engine of the state. We have the Port of Baltimore. Approximately 75 percent of all cars that come in the United States first comes through our port.

“John Deere equipment that a lot of farmers use in rural areas like Utah also comes through our Port. So does other goods like coffee beans. We also have a strong U.S. Coast Guard campus housed here on the Port of Baltimore. It’s important that we not only spread the news, and promote our city, but also remind people about all of the wonderful things Baltimore City has to offer.”

The Baltimore native is in her third term as a Sixth District Councilwoman, representing one of the city’s largest districts. She was elected to her first term after her appointment in 2007.

“The Sixth District includes Park Heights,” she said. “Park Heights has been such a neglected area. I want the overlooked areas of Park Heights to be a part of my legacy of accomplishing growth there. We have been putting in a lot of work to meet human service needs. Park Heights has gone to another level. Now, we are starting the physical development piece. As a result of our efforts, a new library is coming.”

Councilwoman Middleton chairs the Baltimore City Council’s Taxation and Finance Committee. She is also a commissioner on the Division of Aging and Care.

Councilwoman Middleton is a graduate of Morgan State University. She is married to Glenard S. Middleton Sr., Executive Director of AFSCME’s Maryland Council 67 and President of Maryland Public Employees, Local 44. In addition to public service she says that she also enjoys being a wife and mother.

“I don’t like to be called a politician because of my service as teacher,” she said. “I still use those help skills.” Her 20-year career in the Baltimore County School System included teaching at Woodlawn Middle School. When asked if she was interested in pursuing a higher political office, Councilwoman Middleton replied, “I’m happy doing what I am doing. With me, it’s never been about the titles. It’s about the work. I enjoy seeing the smiles on the faces of those who have received my help. Hearing ‘thank you’ is enough for me.”