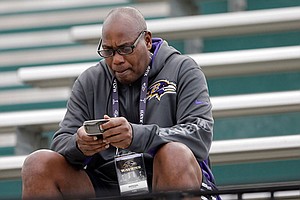 As the rain started to fall to the ground at the University of South Alabama's practice facility, a black Mercedes Benz pulled into a parking spot across the roadway. After taking a couple of minutes to gather some of his things, former Baltimore Ravens GM Ozzie Newsome emerged from the black sedan.

The annual trip to the Reese's Senior Bowl in Mobile, Alabama to watch college football's top prospects is a ritual of Newsome since the 1990s and continued unto 2002 when he became the first black GM in NFL history. Newsome has since retired so his long-term assistant GM Eric DeCosta could take over.

The 63-year-old Newsome is a life long football guy. Newsome's age and extensive history with football showed as he made his way from his car to the football facility for the South team's final practice before game day. Newsome seemed right at home in Alabama.

Born in Muscle Shoals, Alabama, Newsome's ties to Alabama are extensive. He was named the Alabama Player of the Decades in the 1970s. His allegiance remains with the Crimson Tide as shown by the many Alabama players he has selected over the years as the Ravens GM.

Perhaps that's the reason the big smile appeared on his face when he saw Alabama quarterback Jalen Hurts after practice. Newsome watched the prospects practice with the same keen eye that he used to help build a Ravens team that won two Super Bowls, six AFC North Championships and appeared in 12 postseasons since 2000.

"He’s made the Ravens who they are," Ravens head coach John Harbaugh said after Newsome's retirement. "He's the greatest GM in the history of football."

Evaluating players is a habit that Newsome can't shake. He remains with the Ravens personnel department as a scout. Newsome joked that his role is similar to the one that DeCosta once served for him.

Newsome remains in the press box on game day and still watches practices like he used to when he was the GM. The disappointment was evident on his face as he walked down the steps from the press box after Baltimore's loss to the Tennessee Titans in the Divisional Round of the playoffs at M&T Bank Stadium in January.

The Ravens had a first-round bye and finished with a 14-2 record. That's the best record in franchise history. Unfortunately for Newsome and the Ravens it was back to the drawing board after the undesired results. Although he is no longer the head person in charge, Newsome was ready to kick off his 18th offseason in hopes of helping to put together a team that can bring Baltimore their third Super Bowl Championship.