At 115, The Arch Social Club Remains A Beacon On Pennsylvania Avenue 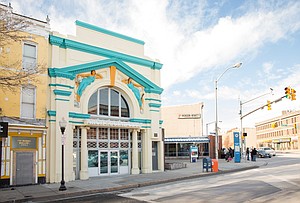 Most Baltimoreans recall the smoke-filled clubs and hotspots like the legendary Royal Theater, The Regent Theater, the Sphinx, and Club Casino— institutions that made Pennsylvania Avenue the place to visit and simply hang out.

The once-bustling corridor where black musicians and entertainers could cut loose in segregated America recently received designation as the location of a new Pennsylvania Avenue Black Arts and Entertainment District.

Pennsylvania Avenue is also the location of the legendary Arch Social Club, which is celebrating its 115th anniversary.

“For nearly a century the Arch Social Club has stood proudly as a cornerstone for Baltimore’s African American civic, political and cultural life,” Club President Van Anderson stated on the Arch’s website.

In a 2019 interview with Essence, Anderson said the club was established in 1905 as a meeting hall for black men in a then-segregated city.

The club brought together merchants, laborers, clergy, professionals, and entrepreneurs to craft strategies for addressing the issues of the day and to fellowship with one another.

A significant stop in Black America’s storied “chitlin’ circuit,’ the club was among those that opened doors to patrons from all walks of life and offered their stages to such icons as Billie Holiday, Cab Calloway, Pearl Bailey, Lena Horne, and James Brown.

The club also served as a meeting place for the civil rights movement, hosting NAACP leaders Clarence and Juanita Mitchell, Thurgood Marshall, Charles Hamilton Houston and others, according to the club’s website.

Anderson noted that in recent years and because of the club’s proximity to the CVS drugstore that burned during the unrest, the club served as safe house and comfort station following the death of Freddie Gray.

“All of the media and all of the attention came here, so people came here every day on this corner,” Anderson told Essence. “We could not open for business, but we supported people needing to go to the bathroom, people needing to do interviews, this and that.”

Now that Pennsylvania Avenue stands ready for revitalization, the Arch Social Club will again play a pivotal role as plans come together that will establish an African American Arts and Entertainment District at its front door, according to Anderson.

Through the proposed construction of a new theater marquee, the Arch Social Club will serve to “shine a light” on efforts to redevelop the formerly vibrant commercial corridor and welcome a new generation of activists, artists, entrepreneurs and patrons to the avenue.

In 2018, the club received a $118,000 grant from the National Trust for Historic Preservation to continue renovations on the building.

“What we are seeing now is that there is a tradition that needs to be kept alive. And that tradition is live entertainment and music and dance,” Anderson said. “For example, our musicians. When I was coming up, the only way you could learn jazz was, we would have to go over Uncle William’s house or Uncle Ham’s house to learn jazz and blues. And so we want to keep that music form of performers and musicians being able to play our music.”