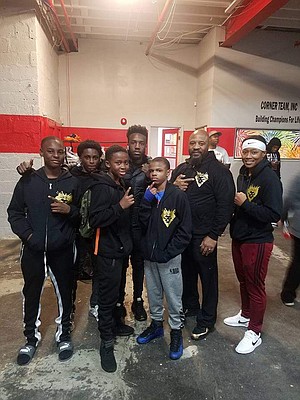 Sweat often flies rather profusely at the Time 2 Grind Boxing Gym in Northeast Baltimore, where it's rare to pull any punches, and where competition is fierce. That is how champions are made.

The small gym, located inside the Transforming Life Church of God has not only produced tough stars inside the boxing ring, but it's also helped many of the young fighters become prodigies outside of sports.

"They're a great group," said Mack "Papi" Allison IV, the son of Time 2 Grind owner and trainer, Mack Allison III. "But, what's most impressive is that they all just got their report cards from school and each of them did really well, and that's what counts. That is what my father tries to instill in all of the kids— a good education," Papi Allison said.

father. And, while Papi Allison prepares for his next pro bout in April, another champion, Destiny "Lady Tyson" Day Owens, is also tuning up for her next professional date.

Papi Allision says his father deserves so much credit not only for the success of the many young fighters who attend his gym but for keeping them focused on education and their future.

Having produced a National Silver Glove champion; several Junior Olympic State champions; and with many young ones competing all over the world, the Time 2 Grind boxing gym has earned a reputation as a top Baltimore recreation center and boxing club.

To the Allison family, the most essential recognition received by the gym is that the community sees it as a safe-haven for young people.

In 2015, the pastor at Transforming Life Baptist Church joined Allison III in helping to create an environment in which the gym could thrive.

"My dad turned this into a real community treasure, and you've had some of the kids win championships," Papi Allison said.

With the Golden Gloves kicking off, Papi Allison says he wouldn't be surprised if more young boxers from the gym bring home a championship.

"I am so proud of my team. Thank God that Pastor David Biggers allowed me to open up a gym inside of the Transforming Life church," he said.

The Time 2 Grind gym remains open to everyone— boys and girls. For more information about the "Time 2 Grind" boxing club, email Mack Allison IV at mallison5020@gmail.com or call 443-631-1663.