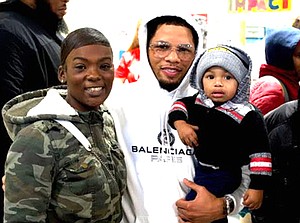 Not too many children can say they shopped for a new coat with a world boxing champion and a reality TV star. But the Boys & Girls Club Of Metropolitan Baltimore can say they did. On Wednesday, December 18, 2019, members shopped with two-time Super Featherweight and Golden Gloves Champion Gervonta “Tank” Davis and Tammy Rivera Malphurs of VH-1’s Love & Hip Hop: Atlanta.

Malphurs and Davis participated in a coat distribution event sponsored by Clothes4Souls and Macy’s. The event benefitted Legal Aid, and took place at the Boys & Girls Club of Metropolitan Baltimore. The Club is located at 3560 3rd Street in Brooklyn, Maryland. According to Macy’s, 500 coats were distributed. Both Malphurs and Davis are Baltimore natives. 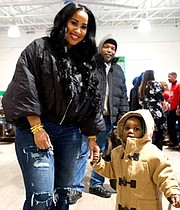 Tammy Rivera Malphurs of VH-1’s Love & Hip Hop: Atlanta and a child during the event.

“I think it was great that Macy’s reached back into the city and donated so many coats,” said Malphurs. “That was amazing. It’s personal to me and I am from Baltimore. I know how it feels to be on the other side of the door. It was me, my sister and my mom. My mother had to go to places for help. I will always be involved in this as long as God gives me the strength.”

In addition to her reality TV career, Rivera is also a singer, fashion designer and businesswoman. Her songs include her first single, “All These Kisses” and her next single, “Only One.”

“I will never be too high or too low to help,” said Malphurs who grew up in West Baltimore. “Wherever I need to be, I am there. God blessed me and I want to bless others. I have a strong belief that I am in this position because God wants me to help others.”

Through its 2019 “Buy a Coat and We’ll Donate One” campaign, Macy’s, donated 35,000 brand new coats nationwide to Clothes4Souls. A division of Soles4Souls, Inc., Clothes4Souls, creates sustainable jobs and provides relief through the distribution of clothing around the world.

From Wednesday, October 9, 2019 through Monday, October 14, 2019, Macy’s invited its customers to help those in need by purchasing a coat in the men’s, women’s, junior’s and children’s outerwear departments in-store and on macy.com. For every coat purchased, Macy’s donated a new coat to Clothes4Souls.

This year, working in partnership with local charities and service organizations in a number of cities across the U.S., Clothes4Souls and Macy’s volunteers donated much needed cold weather clothing to men, women, and children in need throughout the season. Through Macy’s 2019 “Buy a Coat and We’ll Donate One” campaign, Macy’s donated 35,000 brand new coats nationwide to Clothes4Souls, totaling over one million dollars.

This is the sixth year of the partnership between Macy’s and Clothes4Souls, resulting in a total of 270,000 coats distributed nationwide since 2013, with a retail value of more than $10 million.

Giving back felt good,” said Davis. “To see the smiles on the children’s faces was amazing.”

The coat distribution event benefitted Legal Aid, and took place at the Boys & Girls Club of Metropolitan Baltimore. The Club is located at 3560 3rd Street in Brooklyn, MD. According to Macy’s, 500 coats were distributed.

Davis (22-0, 21 KOs) is a two-time Super Featherweight and Golden Gloves Champion. He moved up in weight, and will take on former unified World Champion Yuriorkis Gamboa (30-2, 18 KOs) for the lightweight title. The fight will take place on December 28, 2019 at State Farm Arena in Atlanta, GA.

“This means a lot to me,” said Davis. “I’m only 25. I am not so far ahead to forget how I was brought up. Everyone’s finances don’t allow them to afford things. It felt great to be here. I encouraged the kids to keep their heads up.”

Macy's is the largest retail brand of Macy's, Inc., and delivers quality fashion to customers at approximately 640 locations in 43 states, the District of Columbia, Puerto Rico, and Guam, as well as to customers in more than 100 international destinations through leading e-commerce site macys.com. Macy's flagship stores –including New York City’s Herald Square –are internationally renowned and preeminent destinations for tourists.

“We’re proud that our customers love to give back as much as we do at Macy’s” said Sam Harrison Di Scipio, Macy’s Senior Director of Corporate Communications, Giving and Volunteerism. “Through our longstanding partnership with Clothes4Souls, we’ve been able to share the warmth with those in need for more than seven years. We’re grateful for the support of our customers, colleagues and vendors that have stood behind this important cause with us.”