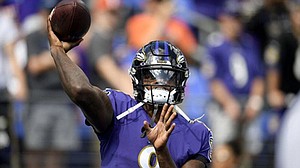 Few people viewed the Baltimore Ravens as contenders to win the AFC North, let alone be the top seed of the AFC overall. That's because they were too busy focusing on Baker Mayfield and all of the things going on with the Cleveland Browns.

Meanwhile Lamar Jackson was gearing up to unleash one of the most dynamic performances ever by a quarterback. Before 2019, Michael Vick was the only quarterback to ever rush for 1,000 yards in a season. Jackson ended the season with 1,206 rushing yards, averaged 6.9 yards per attempt, and scored seven touchdowns.

To borrow a phrase that Jackson jokingly used in some of his post game press conferences, “Not bad for a running back.” Jackson led the NFL is passing touchdowns (36) and threw for 3,127 passing yards with a 66.1 completion percentage. His 36 passes for touchdowns set a franchise record.

Jackson made the thought of him being converted to another position a foolish idea. Most importantly, his value to the Ravens was tremendous.

Jackson led the Ravens on numerous late drives to win games this season. Baltimore finished with a 14-2 record, the best in the NFL. Jackson spearheaded a Ravens offense that finished first in the NFL with 206 rushing yards per game and second in total offense with 407.6 yards per game.

The offense went through Jackson and he orchestrated the attack perfectly. Jackson showed tremendous touch on some of his downfield passes and managed to change his release angle on some amazing throws while escaping the pocket.

Baltimore's offense was relatively unstoppable. When is the last time that could be said of the Ravens offense?

Offensive coordinator Greg Roman has done a marvelous job designing an offense that showcases Jackson and the pieces around him. Rookie wideout Marquis Brown, tight end Mark Andrews, and running back Mark Ingram are all enjoying outstanding seasons.

Now the Ravens have the bye week and patiently await their opponent in the divisional round. The road to the Super Bowl will have to go through Baltimore.

There's no question that Jackson is the MVP. In Harbaugh's eyes, Jackson's impact goes beyond just the team.

"You changed the game, man," Harbaugh told Jackson during a regular season game this year. "You know how many little kids in this country are going to be wearing No. 8 and playing quarterback for the next 20 years because of you?"