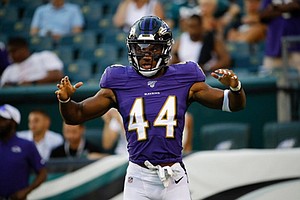 The Baltimore Ravens finished the regular season with the NFL's sixth-ranked pass defense. The team successfully completed their group of cornerbacks when Marcus Peters was acquired from the Los Angeles Rams. Peters had a direct impact on third-year defensive back Marlon Humphrey.

“Marcus [Peters], when he came in, he more helped us restructure, especially in the secondary, the way he was talking and communicating. Chuck [Clark] was a big voice and getting us lined up with things and when Marcus came, he was another big, huge voice that was able to really help us," Humphrey said. "It wasn’t like he came in and we had to figure out how he worked. He kind of came in and told us, ‘Let’s do it like this and this and that.’ So, for him, it’s just been a great addition.”

Humphrey took heed and was selected to the Pro Bowl and named an AP first-team All-Pro. He finished the regular season with three interceptions, two forced fumbles, 15 pass breakups, and 65 tackles.

A lot of Humphrey's damage came when he moved inside to play nickel. According to defensive coach Chris Hewitt, the added duty is something they kind of stumbled upon.

“Originally, it started when we were playing against Cleveland. We wanted to be able to disguise where we were going to put Marlon [Humphrey] so that he could chase Odell Beckham around, so he had to learn some slot and some of the calls," Hewitt said. "Brandon [Carr] was also playing in the slot. So, we did that as a way to disguise what we were doing, as far as coverage-wise, the blitzes and the pressures that we were doing. He did so well that I was just like, ‘Hell, let’s just keep him there.’ And it worked out. He did a great job just preparing, asking a lot of questions and going through our practice, and getting himself prepared. So, he’s done an extremely good job doing that.”

Humphrey embraced the opportunity to add to his repertoire. He said it gave him a linebacker’s mindset, especially when he is being used on blitzes. Lining up as nickel defender only adds to the already impressive list of things that Humphrey brings to the table. He feels it will make him a better overall player in the long run.

"I had to learn a little bit more of the playbook But it’s really made me see the game a lot better, because I already know what the corner is doing, and then on the nickel, I know how the corner is going to play it. I try to play it to where when I was at corner, you have to think, how do you want your nickel to play? And I kind of try to get on the same page as the corner," Humphrey said.

The Ravens will need Humphrey to be at his best when they host the Tennessee Titans in the divisional round of the playoffs on Saturday, January 11, 2020 at M&T Bank Stadium in Baltimore.