Ravens Have A Bright Future Despite Tough Loss 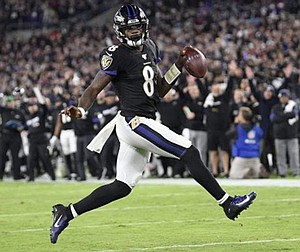 There were a lot of sad faces and a sense of mourning as the final seconds ticked off the clock last Saturday night. What seemed like such a promising season for the Baltimore Ravens ended with a 28-12 thrashing at the hands of the Tennessee Titans.

So many things went wrong. All-Pro defensive back Marlon Humphrey even called his team 'chokers' after exiting from the playoffs with a home loss for the second year in a row. That may be a bit excessive, but Humphrey's frustration is understandable given how talented Baltimore's roster is.

The Ravens finished with a 14-2 record, their best in franchise history.

Although the season didn't end with another Super Bowl victory, there is still reason to be optimistic.

For starters, the Ravens have a young dynamic quarterback that will likely win the MVP after producing a season unlike any other signal caller.

"He's an incredible guy as an athlete, as a person," cornerback Brandon Carr said. "That's very contagious for a locker room. He brings a lot of excitement to the city, to the ball club and to his teammates. They play for him. They root for him. They've got his back out there, and that's important for a locker room to have his team support him and the city as well.

"He's a guy that's finding his way. This is year two for him. He's not going to be perfect. But at the same time, he's incredible who he is right now. The sky's the limit for that guy. I'm excited to see him continue to grow."

In the midst of all of the personal achievements, Jackson remainedfocused on the big game. Falling short will only make him better according to tight end Mark Andrews.

"He's the most competitive person I've been around," Andrews said. "I know he's going to take this and use it as fuel to make himself a better football player. I know he knows that for us, he's our leader. He means everything to this team, this city, and what we're all about. We go as he goes. That's our guy and I love him to death. It's so much fun playing with him, and he's going to continue to get better. We all will with him."

Their style a play matches the defense that was bolstered by a mid-season trade that brought cornerback Marcus Peters into the fold. Peters has since inked a long-term deal. He and Humphrey will be viable starters at cornerback with Tavon Young serving as the nickel corner. That's a pretty good group.

Veteran pass rusher Matt Judon is scheduled to hit free agency and could draw a lucrative contract elsewhere. The defensive front could lose nose tackle Michael Pierce also. Fortunately they have defensive lineman Brandon Williams under contract for the next couple of years. Outside linebacker Jaylon Ferguson also emerged as a starter.

The future is bright in Baltimore. They took a step forward by finishing as the top seed in the conference last season. They'll have offensive coordinator Greg Roman back for at least another year, which bodes well for Jackson and the offense. It should be Super Bowl or bust for the Ravens next season.