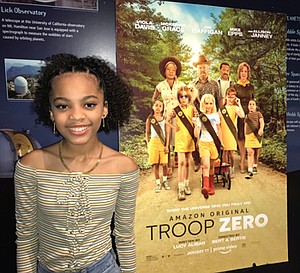 On Friday, January 17, 2020, TROOP ZERO, made its debut on Amazon Prime Video. The family-friendly film about is about a girl named “Christmas Flint” (Mckenna Grace) who is growing up in a tiny Georgia town. When Christmas learns that the winners of the annual Birdie Scout Jamboree talent contest will be included on a recording to be sent into space for posterity, her mission in life becomes to join the Scouts and win Jamboree.

However, when Christmas’ efforts are snubbed by the snobbish local Birdie Scout troop and their uptight leader “Miss Massey” (Allison Janney), she rallies a group of elementary-school misfits to start their own chapter.

Baltimore own’s Milan Ray plays one of those misfits. She talked about being in the film and portraying the feisty character “Hell-No Price.”

“I can relate to Hell-No,” said Milan. “We both like to keep our feelings in. She comes off as a bully. But she has a reason. Hell-No is trying to survive by getting food for her and ‘Smash’ who is her friend. She looks over Smash.”

“Smash,” a character who likes to smash things, is portrayed by Johanna Colón.

With grudging help from her dad’s office manager, “Miss Rayleen” (Viola Davis), Christmas and her crew have to bypass every roadblock Miss Massey can find in the fine print of the Birdie bylaws in order to reach the Jamboree and their chance at immortality. From Christmas’ solitary late-night vigils to a final show-stopping musical performance, TROOP ZERO is an endearing and magical tale set against a backdrop of beloved hits of the ’70s, as Christmas forges friendships that will change her life.

“The movie is filled with many emotions,” said Milan.

“It’s good for all ages and it’s kid friendly. Troop Zero has a message for everyone. It doesn’t matter if you are weird or different. People can come together and bond.”

She also talked about working with Viola Davis.

“It was inspiring to work with her,” said Milan. “Working with a beautiful, inspiring black women was wonderful. It was a great learning experience.”

Milan is 12, and in the sixth grade. She has been acting and modeling since she was three. She has appeared in numerous commercials and has done voice overs for many companies and social media campaigns.

“When I went out for the audition for this movie, I auditioned for Hell-No and a character named ‘Ginger.’ I got the role of Hell-No, but I already expected it. I was like ‘yeah!’”

Milan’s most popular spot is a national Wal-Mart “Trolls” commercial. The commercial has had over 10 million views on YouTube.

“I am absolutely proud,” said Ray. “To see your child live their dream is amazing.”

Milan had this advice for aspiring performers.

“It might start off slow and be frustrating, because you are getting all these auditions and not being cast. But don’t give up. Stick with it. A week before I was cast in this film, I talked to my uncle. He said I would get a role, and he was right.”

TROOP ZERO is rated PG and can be viewed on Amazon Prime.