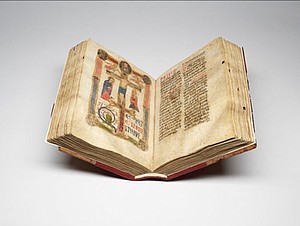 Beginning February 1, 2020, the St. Francis Missal— a legendary 12th-century manuscript and relic of touch of St. Francis of Assisi— will go on view at Walters Art Museum for the first time in 40 years.

The St. Francis Missal is an intimate exhibition that, along with the eponymous text, features approximately 23 objects, including paintings, ivories, ceramics and documentation of the Missal’s recent two-year conservation funded by the Mellon Foundation. “This exhibition is an opportunity for visitors to view one of the museum’s most famous works of art,” said Julia Marciari-Alexander, Andrea B. and John H. Laporte Director. “We are thrilled to once again showcase this key object in our permanent collection and to share exciting new discoveries.”

In 1208, St. Francis of Assisi and two followers were debating what God’s plan for them might be. Unable to agree, they sought answers at the church of San Nicolo in Assisi, which Francis often attended. They opened the Missal, which sat on the altar, three times at random and in every case, the text on the page urged renouncing earthly goods. This pivotal moment laid the foundation for the Franciscan order. Due to this possible contact with the saint, Franciscans worldwide consider the object now known as the St. Francis Missal a relic of touch, and many make pilgrimages to Baltimore to see it.

Decades of use took a toll on the book’s fragile binding, and in 2017, the Walters conservation staff began a two-year restoration project. The Missal has since been repaired, stabilized and digitized for the Walters’ manuscript website Ex Libris, and is available once again for viewing.

“For those familiar with the Missal’s story, it will be an exciting moment to re-engage with an important object. For others, the exhibition will shed light on a manuscript that has a unique and fascinating history,” said Lynley Herbert, Curator of Rare Books and Manuscripts.

The exhibition draws upon the Walters’ world-renowned rare books and manuscripts collection that spans more than 1000 years and contains over 900 manuscripts, 1300 of the earliest printed books, and 2000 rare later editions from across the globe.

The Walters Art Museum is a cultural hub in the heart of Baltimore, located in the city’s Mount Vernon neighborhood. The museum’s collection spans more than seven millennia, from 5000 BCE to the 21st century, and encompasses 36,000 objects from around the world. Since its founding, the Walters’ mission has been to bring art and people together to create a place where people of every background can be touched by art. As part of this commitment, admission to the museum and special exhibitions is always free.