Past due time for American healthcare system to protect Black Americans 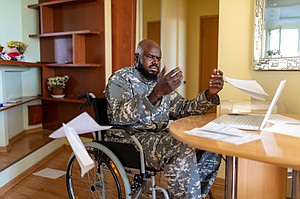 Today, Americans are facing unprecedented times. We are in the midst of a global pandemic, our country has fallen into an economic recession, and hundreds of thousands are protesting police brutality and racial injustice. But there is another epidemic in this country that must be

addressed, and it must be addressed now.

Because of the systematic racism that is rooted in our nation, racial disparities in American healthcare have caused illness, injury, and death in minority communities across the country. Black Americans suffer the most at the hands of the American healthcare system. Now, we are seeing COVID-19 shine a much-needed light on the harsh reality that has been plaguing an entire race for centuries.

In my own home state of North Carolina, Black Americans make up 30 percent of COVID-19 cases and 34 percent of the COVID-19 deaths, even though they only make up 22 percent of the population. Really think about that math. How does it make sense?

That means, 162 Black North Carolinians will die due to COVID-19, which is 70 more than would be expected based on the demographic makeup of the state. That is, 70 more Americans who will die just because of the color of their skin.

Unfortunately, these healthcare disparities are nothing new. Black Americans have long suffered from a severe lack of access to quality, affordable care, which predisposes them to increased rates of underlying conditions and illnesses. Due to the lack of access, Black Americans are often forced to travel very far for care. This usually means, if they have insurance, they must go to out-of-network facilities and often find themselves hit with exorbitant surprise medical bills.

Surprise medical bills are unanticipated costs related to out-of-network or emergency care a patient received. These bills can range from a $50 prescription drug to $30,000 in emergency transport. Not surprisingly, Black Americans suffer from a higher rate of surprise medical bills, at higher costs compared to White Americans.

Congress holds the pen when it comes to reforming surprise medical billing in this country, but they are falling far short of what needs to be done. There are multiple bills in the House and the Senate that claim to rectify this injustice, but all of them still leave the cost to patients or providers without holding insurance companies accountable.

While Congress is trying to figure it out, we are seeing the administration miss the mark as well. In a Twitter thread on June 22, CMS Administrator Seema Verma may have misdiagnosed the real root of the issue – insurers. Because of the blatant and intrinsic greed, these companies are starving patients of care and putting the financial burden on their shoulders.

In a recent Congressional hearing, Dr. Rhea Boyd, a practicing physician and healthcare scholar said, “ensuring that insurance is not a barrier to healthcare is really critical, particularly for African Americans...”

It is clear that Senator Lamar Alexander and Representatives Frank Pallone and Greg Walden, three of the members committed to eradicating surprise medical billing, are in the pockets of Big

Insurance. The bills they are sponsoring do not even bring insurance companies to the negotiating table, let alone hold them responsible.

We are halfway through 2020, and we still do not have proposed legislation that gets at the root of the surprise medical billing problem. We must get rid of skinny networks, improve access to care, and cover emergency services. It is time for insurance companies to pay, so we can save Black lives. Black Lives Matter.

Dr. Benjamin F. Chavis, Jr. is President and CEO of the National Newspaper Publishers Association based in Washington, D.C. He regularly comments on public policy issues that impact the quality of life of Black America. Dr. Chavis was the first person to coin the term “environmental racism.”